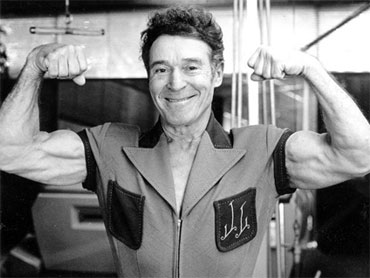 Jack LaLanne, the late guru of physical fitness for generations of homemakers, was remembered Tuesday by Arnold Schwarzenegger and other bodybuilders as a pioneer and an inspiration.

The former California governor said he first met LaLanne in 1968 on Venice Beach in Los Angeles, where LaLanne suggested they work out together.

"After 30 minutes of chin-ups and other exercises, I got so pumped I couldn't move anymore," Schwarzenegger told several hundred people at a "Celebration of Life" gathering at Forest Lawn cemetery in the Hollywood Hills. "He kept doing it for another hour."

Schwarzenegger joked that with LaLanne in heaven, there would be no slacking off for those who thought they could rest in peace.

"He has already told old Saint Peter that the wake-up call is going to be at 6 in the morning," Schwarzenegger said. "And there will be thousands of push-ups."

Exercise legend Richard Simmons told The Associated Press his mother watched LaLanne's show religiously when he was growing up, but he wasn't crazy about the fitness fanatic.

"I hated him," Simmons said. "I wasn't ready for his message because he was fit and he was healthy and he had such a positive attitude, and I was none of those things."

However, Simmons said he later had LaLanne on his own exercise show in 1980, and they went on to appear at many events together.

"I owe him an apology," Simmons said.

LaLanne's daughter Yvonne Lalanne said that despite her father's strong image, "He fought his demons and largely won."

"He hated working out, but he loved the results," she added.

LaLanne, who often said, "I can't die, it would ruin my image," was 96 when he succumbed to pneumonia at his Morro Bay home on Jan. 23. He was a jumpsuited purveyor of fitness decades before celebrity exercise advocates began to flood the airwaves.

As early as 1936, LaLanne opened a gym that encouraged weight-training for women. His TV show that ran from the 1950s through the 1980s used equipment as simple as a towel or chair to perform exercises. It was especially popular among housewives.

Preaching exercise and a healthy diet, he also wrote books and marketed vitamin supplements and juicers.

LaLanne also was known for feats of strength such as doing more than 1,000 push-ups and, at age 70, swimming a mile in Long Beach harbor while handcuffed and towing 70 rowboats.

When Schwarzenegger was California governor, LaLanne was on his Governor's Council on Physical Fitness and Sport.

A large photo of LaLanne in his trademark jumpsuit, with one of the dogs that appeared with him on his show, hung on the stage next to a lectern that displayed a barbell.

LaLanne's son Dan LaLanne said it was the mate of a barbell that his father kept with him during his final hours and was interred with him.