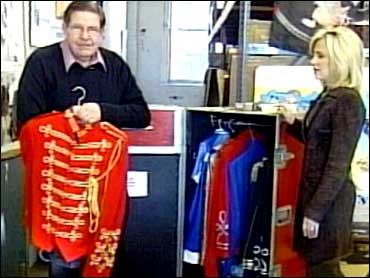 Pop star Michael Jackson has won a legal fight to shut down a pay-per-view Web site operated by a New Jersey man once awarded a warehouse full of Jackson family memorabilia.

A ruling last week in Los Angeles federal court also said Henry V. Vaccaro Sr. could not sell Jackson's possessions, but Vaccaro said he shipped the goods to a European buyer weeks ago.

"The goods are gone and God bless them," he said Monday.

A lawyer for Jackson said he'll seek a court order to have the memorabilia returned.

Vaccaro has not revealed the sale price, but indicated it exceeded $1.4 million. The collection included gold-trimmed costumes, financial documents, letters, awards, and one of Jackson's first outfits worn with the Jackson 5.

Vaccaro, a construction company owner, said he was awarded the Jackson family possessions following years of legal wrangling stemming from a failed business venture that wound up in bankruptcy court.

Jackson attorney Brian Wolf said the pop star's possessions should not have been included in the goods given to Vaccaro. He said the bankruptcy case allowed Vaccaro to get property belonging only to Michael Jackson's brothers, Tito and Jermaine, and their parents.

Before shipping the hoard to the European buyer whom he declined to identify, Vaccaro spent 18 months photographing and cataloguing it for his Web site.

The site was shut down two weeks ago when Jackson's lawyers notified Vaccaro's bank of the lawsuit, Vaccaro said. Wolf said viewing it was still possible more recently; the site was not online Monday night.