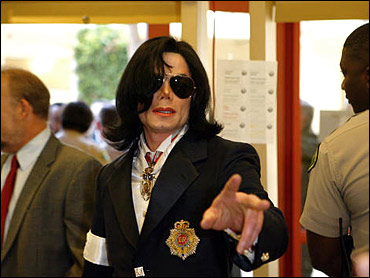 The prosecution objects, saying Jackson might flee the country.

The issue was expected to be discussed during a hearing scheduled Friday.

"Three million dollars has no basis in logic, fact, or law, and the prosecution does not even begin to establish a basis for such bail," according to a defense filing made available Thursday.

In other motions, lawyers representing news organizations including The Associated Press were expected to argue that the entire grand jury indictment should be made public.

The circus-like atmosphere that surrounds nearly every michael jackson appearance is not expected in Santa Maria Friday, reports CBS News Correspondent Vince Gonzales. The pop star is not required to be in court and likely won't show, diminishing the chance for a repeat of past public spectacles.

But both Jackson's lawyers and prosecutors are expected to tell the judge the case will be ruined if the public learns details of the recent grand jury indictment of Jackson, especially on the charge of conspiracy, which involves some 28 unnamed overt acts allegedly committed in an attempt to intimidate the singer's young accuser.

CBS News has learned that prosecutors are also holding on to the threat of arrest of five Jackson associates for being part of the conspiracy, but they acknowledge they aren't likely to arrest the five anytime soon. It's unclear if their names will ever be officially revealed.

Also, the defense wants access to about 400 items seized by prosecutors and to interview transcripts with dozens of witnesses. The motion, made public Thursday, asked the judge to intervene to make sure the defendants are allowed to fully examine the evidence.

The prosecution has said the items are still undergoing forensic examination and are not available.

The judge was expected to set a tentative trial date. He has already said he wants the trial to start this year, but defense attorney Thomas Mesereau Jr. hinted in a court filing that will be difficult unless the prosecution starts complying with discovery orders quickly.

Jackson, 45, has pleaded not guilty to committing a lewd act upon a child, administering an intoxicating agent, alcohol, and conspiracy to commit child abduction, false imprisonment and extortion.