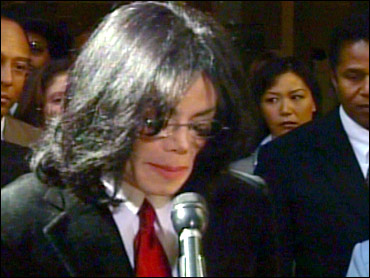 Michael Jackson pleaded not guilty Friday to a grand jury indictment charging him with child molestation and a conspiracy count involving allegations of child abduction, false imprisonment and extortion.

The alleged child abduction, false imprisonment and extortion are not individual charges, but are alleged as the circumstances leading to the conspiracy count.

After being given copies of the indictment, Jackson and his attorneys went into a room next to the courtroom to read it.

Superior Court Judge Rodney Melville then agreed to a prosecution request that portions of the indictment regarding the conspiracy count be sealed. He also agreed with a defense request that parts of three lines be removed.

After the hearing, Jackson left the courthouse with his parents, and addressed reporters. He thanked his fans for their support and said Santa Maria was a "wonderful" community.

Jackson didn't directly address the child molestation charges against him.

But his lawyer, Thomas Mesereau, said the case will be about what he called the ''innocence and complete vindication of a wonderful human being named Michael Jackson.''

Mesereau said he will show Jackson's "integrity" and "decency."

The indictment, issued in secret earlier this month, replaces charges filed by prosecutors that alleged seven counts of lewd or lascivious conduct involving a child under 14 and two counts of administering an intoxicant to a child under 14.

Copies of the indictment, with the requested deletions, were not immediately released to the public, and it was not known whether the new charges involved the same child mentioned in the original charges, or what the conspiracy and extortion counts referred to.

The judge said the transcripts of the grand jury proceedings would be turned over to attorneys Monday but will remain under seal. He said he will hold a hearing on the sealing May 28. Jackson waived his right to a speedy trial.

Mesereau, a veteran criminal defense attorney, took over the case last weekend after Jackson decided to remove Mark Geragos and Benjamin Brafman, the two high-profile lawyers who had been directing his defense.

The pop star said he wanted lawyers who could devote full time to his case. Geragos has another high profile case at the moment: the murder trial of Scott Peterson.

With an indictment, prosecutors don't have to go through a preliminary hearing before the judge to show there is enough evidence to put the singer on trial.

Police Chief Danny Macagni said 42 of Santa Maria's 107 police officers were assigned to the courthouse, along with about 50 sheriff's deputies, to handle the throng of fans and journalists.

Outside the courthouse Friday, some fans waved handmade signs toward the throng of television cameras. A banner reading "Michael — Being here is the least we could do. To all: Through this media circus don't let your ears deceive you" was also draped along the fence.

A Web site for Jackson fans had encouraged them to show up and demonstrate support for their idol. A hotel in nearby Solvang gave fans a special rate.

Jackson, who was scolded by the judge for being late to his previous arraignment, arrived 40 minutes early. He waved to several hundred fans as he entered the courtroom under an umbrella.

After that hearing, Jackson danced on top of a vehicle for a crowd of 3,000 fans. Experts said it was likely that Jackson's new lawyer advised him such raucous displays are not in his best interest.

"The indictment means things are getting serious," said Loyola University Professor Laurie Levenson. She said Jackson's behavior at the arraignment sets the tone for the rest of the case.

On Thursday night, two to three dozen fans gathered outside the singer's Neverland Ranch about 30 miles from the courthouse for a candlelight vigil. Some wore black "Free Michael" T-shirts, and one dressed as the singer.

Pedro Rivero, a 22-year-old from Madrid who said he had met Jackson "too many times to count," said he had a feeling he needed to be at the arraignment.

"Everything that's happening is so unfair," said Rivero. "He's just so genuine, so pure."