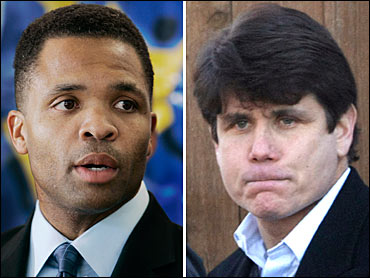 Shortly after his 2002 election, Gov. Rod Blagojevich told U.S. Rep. Jesse Jackson he'd planned to appoint Jackson's wife as state lottery director but didn't because the congressman refused his request for a $25,000 campaign donation, a person familiar with the conversation told The Associated Press Tuesday.

"Blagojevich went out of his way to say, 'You know I was considering your wife for the lottery job and the $25,000 you didn't give me? That's why she's not getting the job,"' the person said, speaking on the condition of anonymity because of the ongoing federal investigation.

Jackson spokesman Kenneth Edmonds declined to comment on the account, but said Jackson has approached federal investigators to discuss the governor and others for years.

"He has shared information with federal prosecutors about public corruption during the past several years, including information about Blagojevich and others," Edmonds said.

Randall Samborn, spokesman for the U.S. Attorney's office in Chicago, declined to comment, as did Blagojevich spokesman Lucio Guerrero. WLS-TV in Chicago first reported the exchange.

Jackson's name has played prominently ever since Blagojevich was arrested last week on corruption charges that include allegations he tried to sell or trade President-elect Barack Obama's vacant Senate seat for personal gain.

Jackson has acknowledged being the unnamed "Senate Candidate 5" referenced in the federal criminal complaint against Blagojevich. The complaint quotes Blagojevich as saying on federal wiretaps that an associate of the candidate offered to raise money for him if he picked the candidate to fill Obama's seat.

Jackson has acknowledged openly seeking the position, but denies initiating or authorizing anyone to promise anything to Blagojevich on his behalf. The congressman has said federal prosecutors have told him he is not a target of their investigation.

The person did not know whether Jackson's wife, Sandi, who has since been elected to the Chicago City Council, had asked for the state lottery job. At the time, Blagojevich was the first incoming Democratic governor after years of Republican rule and had scores of state jobs to fill.

"The governor had kind of penciled Sandi in as lottery director and then asked for contributions from the congressman," the person said.

Sandi Jackson did not immediately return a call to her office seeking comment.

In April, the Chicago Tribune reported that an examination of campaign donations to Blagojevich showed that three in four donors who gave exactly $25,000 received administration favors such as state board appointments or contracts.

It's also the same amount of money that figured prominently in the testimony of a government witness in the political corruption trial this summer of political fundraiser Antoin "Tony" Rezko.

Ali Ata, the former executive director of the Illinois Finance Authority testified that Blagojevich spoke encouragingly about getting him a job in his administration after he personally brought him a $25,000 campaign contribution.

Rezko, who raised more than $1 million for Blagojevich's campaign fund, was convicted of shaking down businesses seeking state business for campaign contributions.

The person familiar with Jackson's discussions also said Tuesday that Jackson has spoken with federal investigators about a 2006 meeting with Rezko where the two discussed a proposed airport in Peotone, long considered a possible location for a third Chicago-area airport.

The person said Rezko told Jackson, a longtime proponent of the airport, that Blagojevich wanted to control the airport's board, but Jackson balked.

Meanwhile, Illinois lawmakers launched an unprecedented impeachment inquiry Tuesday against Blagojevich, who showed no sign of going down without a fight.

An impeachment panel met briefly and then adjourned until Wednesday, giving Blagojevich time to send a representative to the hearings, which may last into January.

Lawmakers on Monday shelved the idea of setting a special election where voters would fill the vacant Senate seat of President-elect Barack Obama.

But the House also voted 113-0 to create a bipartisan committee that will recommend whether Blagojevich should be impeached. That 21-member panel met for about an hour Tuesday, with members making speeches about the gravity of the scandal.

Committee chairwoman Rep. Barbara Flynn Currie, D-Chicago, began the meeting by saying the Blagojevich scandal had created a "crisis of confidence" in state government. But she cautioned panel members against moving too fast.

"Let us remember that we're not Alice in Wonderland. We're not the Red Queen. We do not sentence first and then do the verdict," she said.

"Frontier justice will not prevail in this proceeding. A rush to judgment does not serve the people of the state well."