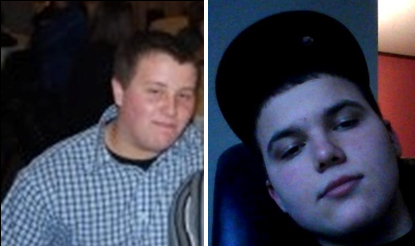 Dressed only in undergarments and bearing gunshot wounds, the bodies were found Friday in a neglected field of high grass and garbage on Detroit's east side.

Kudla, 18, and Bobbish, 17, were last seen a week ago Sunday evening when they left a relative's home on Detroit's east side. Virgie Kudla, Jacob Kudla's mother, grew concerned when her son didn't return home that night and filed a missing persons report in Westland.

Detroit police reportedly found Kudla's 2001 Chevrolet Cavalier late Monday night, abandoned and with its sound system removed. Reports say the boys were carrying a large amount of cash for unknown reasons when they disappeared, according to CBS Detroit.

Casey Green, 39, and Larry Anderson, 40, were charged with larceny, obstruction of justice and tampering with evidence in the car. A judge set bond at $250,000 during a brief arraignment Saturday.

"Our hope is they know something. We haven't heard," Jacobs said.

Sgt. Alan Quinn, a Detroit police spokesman, said he didn't know if Green and Anderson were suspected of involvement in the teens' deaths.

Bobbish's father, Mike Bobbish, said his family is holding up, despite "a lot of crying." He said the teens probably were easy targets, young men with new sneakers riding in a car with a souped-up sound system.

"They're in a bad area, naive, tougher than they really are. Something happened," Bobbish said hours after authorities confirmed the identities of the bodies.

Kudla, a Schoolcraft College student, and Bobbish, a high school senior, were like brothers and often went to Detroit to visit family members, Jacobs said Friday.