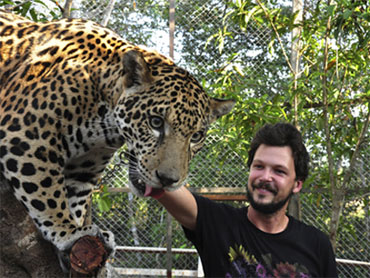 An endangered spotted jaguar rescued from poachers is one of the stars of a soon-to-released feature film shot in the Brazilian Amazon, officials said Thursday.

The 15-month-old jungle cat named Catarina plays the mother of a lost cub found by two children in "Taina 3" - an adventure story about an 8-year-old Indian girl who dreams of becoming a warrior and battles a timber smuggler bent on exploiting the rainforest.

Natalia Lima of Ibama, the enforcement branch of the Environment Ministry, said agents in the city of Coari rescued Catarina in March from poachers who intended to sell her to foreign tourists for 30,000 reals ($17,000). Lima did not give further details of the rescue or identify the poachers or tourists.

The jaguar spent four months being cared for at Ibama headquarters in Manaus and was then taken to Santarem in the state of Para for filming.

Catarina is an "extremely docile animal who loves being around people, especially children," said "Taina 3" producer Virginia Limberger. "It was very easy working with her."

After wrapping up her role in the movie this week, Catarina was taken to her new home, a shelter run by NEX, a non-governmental organization in the state of Goias whose name plays on the words "no extinction."

"I hope he and Catarina will form the perfect couple and reproduce," Gianni said.