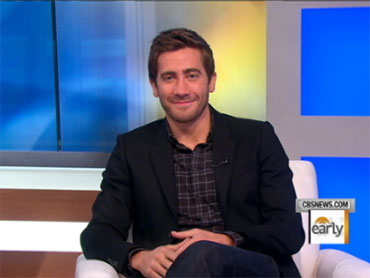 In the new movie "Love and Other Drugs," Oscar nominee Jake Gyllenhaal stars as a prescription drug salesman who loves to talk, but hates to commit.

He seems to have met his match, though, in a free-spirited artist played by Anne Hathaway.

While the film has its laughs, it's also a tear-jerker, so get your Kleenex ready.

Initially, Gyllenhaal wasn't even considered for the part. Director Ed Zwick, who also wrote the film, didn't want the "Brokeback Mountain" actor to star in it and didn't want to take his calls.

"He (Zwick) now tries to coat it over a bit, but yeah, at first, he had seen me be vulnerable in movies, but never seen me not be vulnerable. So I had to prove to him I could be a real, real jerk. That wasn't that hard," he laughed.

How did Gyllenhaal end up getting the role?

"Well, I basically said just get me a room -- I said get me in a room like a salesman. I could probably sell him I could do this part and I got in the room with him and I said pretty much like the character, I said, 'You wrote this movie for me, you just don't know it,"' he explained.

At that point, Anne Hathaway, his former "Brokeback Mountain" co-star, wasn't involved yet, but Gyllenhaal worked that out, as well, and he and the director talked her into it.

"Ed and I went out and courted her," he says.

"Love and Other Drugs" is a super-modern, almost post-modern story because, in the beginning, it's just about the characters' physical attraction to each other. It's two people who don't want to commit, who hate commitment, and can't keep their hands off each other.

"Yes, they like sex, but not intimacy," Gyllenhaal said.

Spending a lot of time onscreen with your clothes off requires a serious amount of confidence, but the humble actor says he turns it up for the job.

"I think a job like acting is just such a tough one, particularly when you are naked with Anne Hathaway. It is very important you have a lot of confidence," he joked.

Gyllenhaal is definitely in touch with his level of commitment. "Yes, well, I am fully committed to everything I do in the cinematic bed," he said.

Realistically, confidence should never be an issue for Gyllenhaal, who made People Magazine's "Sexiest Man Alive" issue.

Although he didn't make the cover, he says, "It's an honor be underneath Brad Pitt, it always is. I have to say -- it was a tough job. It gets harder. ... I'm getting older," he said.

So, will one of the "Sexiest Men Alive" who's rumored to be dating country superstar Taylor Swift ever settle down?

"Yeah, definitely. Definitely. I'm sort of totally inspired by my sister and her husband and my niece and my family recently has had, you know, sort of splits in it, and we all have kind of come back together in a really wonderful way," he said. "And so, I think I look at it in a whole new light and I'm definitely up for that. That's what I'd like in my life."

"Love and Other Drugs" is out in theaters today.