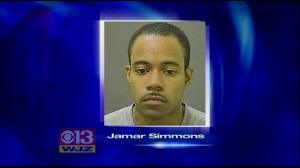 A raid on a local warehouse by the FBI led to the discovery of "a small amount of marijuana and various ledgers and documents that would suggest that an online prostitution and human trafficking operation was being conducted from that location," Anthony Guglielmi of the Baltimore City Police Department told CBS Baltimore.

In 2010, Simmons, 29, was arrested by Baltimore County police on similar charges of prostitution and human trafficking. Most of the charges were dropped and he was put on probation.

Chief Kevin Cartwright of the Baltimore Fire Department told CBS Baltimore that Simmons has been suspended without pay and the department will begin their preliminary investigation.

Simmons and Colt are both facing prostitution and gun charges, but because Colt has already been convicted of an unknown crime, he could face elevated charges.

Baltimore City police told CBS Boston that are in discussions with the FBI about possible federal charges against them.