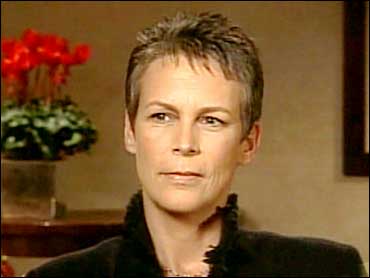 Jamie Lee Curtis has been making movies for over a quarter of a century, moving from queen of the horror film to sexy leading lady and beyond, reports The Early Show entertainment contributor Laurie Hibberd.

A mother and best-selling children's book author, Curtis had pretty much given up on her film career, until "Freaky Friday" fell in her lap.

In her new film, "Christmas With The Kranks," she sheds the glamour of some earlier roles for a more down-to-earth look.

"I check my ego at the door every time I work. I really have never felt that the way I look is my ticket. I always felt kind of unattractive growing up. I felt like I was the kind of weird-looking - cute but never pretty," she says. "And my goal has always been: look true to who it is you're playing."

In "Christmas With The Kranks," she and costar Tim Allen play a suburban married couple who decide to boycott the holiday season, to the dismay of all those around them.

"Hopefully, women around the country who love the movie and love the style will identify with it and go, 'Oh, she looks like me. Oh, yeah!' And that's my goal."

Curtis notes that the film works because people don't like change.

"Embracing change is hard for people. I got sober six years ago. And I'm telling you, a lot of people aren't comfortable with it at first," she says.

People were not comfortable when she refused drinks, because it made them look at themselves, she says. "People like things just the way they were."

Curtis says the family aspect is what really is at the core of "Christmas With The Kranks."

"And I think that the thing to remember, the whole thing that the movie gets down to beautifully at the end, is that it's a time for friends and family to come together."

Curtis chokes up when noting this will be her first Christmas without her mother, actress Janet Leigh: "That's just gonna be hard. And so what it does is it attaches to what really is important about the holidays, which is your family. Not the stuff. Not the snowman. Not the decorations but your family."