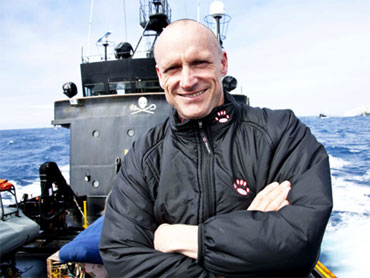 Japan's coast guard arrested an anti-whaling activist from New Zealand on Friday for illegally boarding a whaling ship last month in the latest incident in the ongoing battle over Japanese whaling.

Peter Bethune, a member of the U.S.-based Sea Shepherd activist group, is accused of jumping aboard the whaling vessel from a Jet Ski on Feb. 15 in Antarctic seas, where Japan was conducting its annual whale hunt.

Boarding a Japanese vessel without legitimate reasons can bring a prison term of up to three years or a fine up to 100,000 yen ($1,100).

Sea Shepherd said Bethune jumped aboard the Shonan Maru 2 to make a citizen's arrest of its captain and hand over a $3 million bill for the destruction of a high-tech protest ship Bethune captained, the Ady Gil, which sank in January after colliding with the whaling ship. Since his boarding, Bethune has been in custody aboard the ship while it made its three-week voyage back to Japan.

Dozens of Japanese camera crews were waiting by the dock for the ship's arrival Friday in Tokyo port, where about 10 right-wing protesters held up signs branding Bethune as an "eco-terrorist."

"Anyone who has done wrongdoing will have to face severe punishment in accordance with the law," Fisheries Minister Hirotaka Akamatsu told reporters.

Bethune was to meet a lawyer and a New Zealand diplomat later in the day. New Zealand Foreign Affairs Minister Murray McCully said Bethune would receive the consular assistance that is routinely provided to New Zealanders arrested overseas.

Aussies to Japan: Stop Whaling or Else

The brazen boarding was the latest incident in Sea Shepherd's campaign to hamper Japanese whaling activities. The activists trail whaling boats and try to disrupt the hunt by dangling ropes in the water to snarl the ships' propellers and hurling packets of stinking rancid butter on the whaling ships' decks.

The whalers have responded by firing water cannons and sonar devices meant to disorient the activists.

Japan's annual whale hunt is allowed by the International Whaling Commission as a scientific program, but opponents call it a cover for commercial whaling, which has been banned since 1986.

Whale meat isn't widely eaten in Japan, but is available in some restaurants and stores.

Sea Shepherd leader Paul Watson said in an interview last week with Japanese public broadcaster NHK that Bethune knew "what he was doing" when he boarded the whaling vessel to confront its captain.

"We are going to expose the illegality of the Japanese whaling operation at every opportunity," he said.

Officials have two days to interrogate Bethune before handing him over to prosecutors to decide whether to press formal charges against him to stand trial in Japan, said coast guard spokesman Masahiro Ichijo. He said authorities are also considering additional allegations, including assault and destruction of property.

"We will aggressively investigate this case, and a string of other alleged obstructions" by Sea Shepherd, Tokyo coast guard chief Takeo Murui told a news conference after the arrest.

Japanese authorities say they suspect Bethune might be linked to the injury of two whalers hit by bottles containing rancid butter, and the slashing of a protective net belonging to one of the Japanese whaling boats.