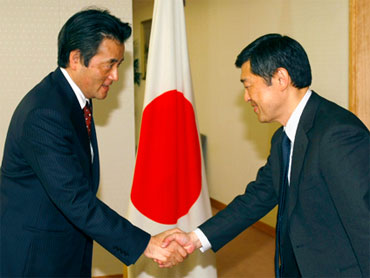 Japan confirmed for the first time Tuesday the existence of once-secret Cold War-era pacts with the U.S. that tacitly allowed nuclear-armed ships to enter Japanese ports in violation of Tokyo's postwar principles.

The investigation is part of Prime Minister Yukio Hatoyama's campaign to make his government, which was elected last year, more open than that of the long-ruling conservatives, who repeatedly denied the existence of such pacts.

Among the secret pacts the panel acknowledged was a tacit agreement that allowed U.S. nuclear-armed warships into Japanese ports, violating a Japanese commitment not to make, own or allow the entry of nuclear weapons.

"It's regrettable that such facts were not disclosed to the public for such a long time, even after the end of the Cold War era," Foreign Minister Katsuya Okada told a news conference.

Speculation about the existence of such secret pacts have been swirling in Japan for years, so the panel's findings likely won't shock most Japanese, although it will likely exacerbate distrust of the previous administrations. That sentiment could help Hatoyama's government, whose approval ratings have been sliding ahead of this summer's upper house elections.

Okada said the investigation wouldn't affect the U.S.-Japan security alliance, under which nearly 50,000 U.S. troops are stationed in Japan. The U.S. is obliged to respond to attacks on Japan and protects the country under its nuclear umbrella.

Tokyo's ties with Washington have been strained since Hatoyama took office last September because of a dispute over the relocation of a key U.S. Marine airfield on the southern island of Okinawa.

The purpose of the investigation, Okada said, was to regain public trust in Japan's diplomacy.

There is strong aversion to nuclear weapons in Japan, the only country to suffer atomic bombings - in Hiroshima and Nagasaki at the end of World War II.

The panel, led by University of Tokyo professor Shinichi Kataoka, said that while documents showed that Washington and Tokyo appeared to have differing interpretations about allowing nuclear-armed ships into Japanese waters, it was likely that Tokyo and Washington shared an unspoken understanding permitting them to make port calls in Japan.

The panel also concluded that the two sides agreed not to press this delicate issue too much out of fear it would interfere with their security alliance.