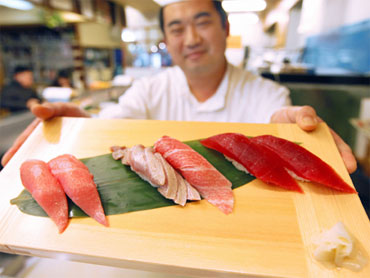 Japanese fish dealers on Friday welcomed the rejection of a proposed trade ban on Atlantic bluefin tuna - a prized ingredient of sushi - while urging that existing quotas be more strictly enforced to protect the species from overfishing.

Thursday's vote at a U.N. meeting in Doha, Qatar, rejecting the ban was front-page news in all major Japanese newspapers Friday morning.

Japan consumes about 80 percent of the world's Atlantic bluefin tuna, and the possibility of a ban had consumers and fish wholesalers worried that prices for the pink and red meat of the fish - called "hon-maguro" here - would soar or that it might even vanish from some menus.

Stocks of the fish have fallen by 60 percent from 1997 to 2007, and environmentalists argue that a trading ban imposed by the 175-nation Convention on International Trade in Endangered Species, or CITES, would protect the fish.

But the Japanese government and fishing industry say an outright trading ban is too drastic a step, and that catch quotas set by another body, the International Commission for the Conservation of Atlantic Tunas, should be more strictly enforced to protect the species from overfishing. In November, ICCAT cut the annual global quota by 40 percent to 13,500 tons.

"Rather than ban exports, we should make sure to limit the number caught," said Kazuhiro Takayama, a fish wholesaler at Tokyo's sprawling Tsukiji fish market. "A lot of people depend on this fish for their livelihoods."

Economic concerns appeared to trump environmental ones, as fishing nations from Asia, Africa, Latin America and the Caribbean complained that any ban would damage their fishing communities and that fears of the stock's collapse were overstated.

The proposed trading ban garnered little support at the CITES meeting, with 68 countries voting against it, 20 for and 30 abstentions. The European Union asked that implementation be delayed until May 2011 to give authorities time to respond to concerns about overfishing, but that proposal also fell flat. The measure needed a two-thirds majority to pass.

After the vote, Masanori Miyahara, chief counselor of Japan's Fisheries Agency, said pressure would be on his country and others that depend on the Atlantic bluefin to abide by ICCAT quotas.

But environmentalists say ICCAT has repeatedly failed to enforce catch limits - and that the quotas themselves are insufficient.

"For Japanese consumers, this is the wrong direction," he added. "Consumers here love to eat sushi and want to pass this along to the next generation, but what the Japanese government is doing is totally opposite to this."

Junichi Hakuta, a 52-year-old fish wholesaler at Tsukiji market who relies on tuna for half his business, acknowledged that he was worried about declining bluefin stocks, but said the media attention to the issue would contribute to conservation efforts.

"There is a problem with overfishing, and ICCAT needs to enforce its catch limits more strictly," Hakuta said as motorized carts whizzed by carrying containers filled with squid, fish and clams in ice water. "The whole world needs to work on this. We need to protect our resources. So I see this as a good result from the meeting."

Coming amid criticism of Japan's whaling program - as well as an Oscar award for the film "The Cove," which depicts the dolphin-hunting village of Taiji in southwestern Japan - the tuna issue has caused some fishermen to feel that aspects of their culture are being attacked.

"It's wrong - people telling us what we can and can't eat," said Yukio Unagizawa, a wholesaler at Tsukiji market. "Foreigners eat cows. ... Catching dolphins is part of that village's tradition."

The tuna vote was a hot topic in hundreds of fishing villages that dot Japan's coasts. While fisherman that ply local waters generally opposed the ban, some said they could benefit from it because of a likely spike in prices of domestically caught tuna.

But Ichiro Murayama, an official in the fishing cooperative in the small town of Katsuura, near Taiji, said that was a short-term view. A move to prohibit trade in certain areas could make it easier to ban others, he said.

"This wave of putting restrictions on the fishing industry is getting stronger," Murayama said. "This is a trend that could lead to banning tuna fishing even in coastal waters."

A major daily, the Asahi newspaper, also wondered about the future of the declining bluefin.

"How will various countries cooperate to manage tuna resources? The immediate crisis has passed, but the biggest issue remains unresolved," it said in an analysis.