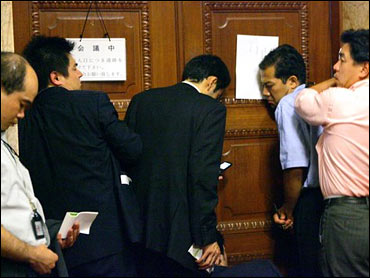 Japanese Prime Minister Shinzo Abe was hospitalized for exhaustion Thursday, a day after he announced would resign, in reaction to a failure at the ballot box and a political brawl over the country's aid to U.S.-led coalition forces in Afghanistan.

Toshifumi Hibi, a doctor at Keio University Hospital, says Abe, 52, will be in the hospital for three or four days for treatment of abdominal pains, exhaustion and other symptoms of "psychological stress."

"His doctor determined that his fatigue level has reached its peak, so I think that the doctor concluded that he needed to be examined at a well-equipped facility," said Chief Cabinet Secretary Kaoru Yosano.

Abe surprised members of his party and even his own Cabinet on Wednesday by deciding to resign only days after he pledged to stake his government on the success of legislation to extend a naval mission providing fuel for coalition warships in the Indian Ocean.

Thursday, Finance Minister Fukushiro Nukaga said he plans to run for president of the ruling Liberal Democratic Party - a position which guarantees election as prime minister - and shortly afterward, former Prime Minister Junichiro Koizumi said he will not run for the position.

The LDP will make its choice on September 23rd.

Announcing his resignation Wednesday, Abe, whose government was severely damaged by a string of scandals and his party's loss of control of the upper house of parliament in July elections, said someone more politically viable should shepherd the Afghan measure that the opposition is trying to scuttle.

"I decided a quick decision was necessary, and that a further delay would cause political confusion," he said during a nationally televised news conference. "I find myself unable to keep my promises - I myself have become an obstacle to fulfilling those promises."

Yosano has said that medical problems did contribute to Abe's decision. He said Abe had been receiving regular checkups from his personal doctor since returning from a regional summit in Australia earlier this week. He declined to give any details.

Abe, the country's youngest postwar prime minister, listed the election defeat and an opposition leader's refusal to meet with him earlier in the day as signs that he could no longer lead.

It was clear, however, that Abe's unpopular government had become a liability for the ruling Liberal Democratic Party, which is facing increasing calls from the resurgent opposition to hold early elections for the powerful lower house of parliament.

Four of Abe's Cabinet ministers have resigned in scandals, including one who quit this month just a week after being appointed. An agriculture minister committed suicide over a money scandal in May.

"It appears Abe finally cracked under the psychological pressure," said Eiken Itagaki, a political analyst. "He stalled in trying to save his government after the election defeat, and now time has run out."

Abe, whose support ratings in opinion polls had sagged to about 30 percent, did not announce a date for his departure.

The Liberal Democratic Party said it would use a streamlined election process to choose his successor as party president, reportedly on Sept. 19. The party leader is guaranteed election as prime minister because the party controls parliament's lower house.

"Calls for Koizumi were the loudest," parliament member Masahiko Shibayama told reporters after a meeting of some ruling party legislators. Kyodo said at least 31 party lawmakers signed a petition calling for Koizumi's return.

But lawmaker Gaku Ishizaki told TV Asahi that the former premier had so far rejected the idea of returning to power.

Abe's former foreign minister, Taro Aso, was widely viewed as the front-runner. Aso, a conservative who while serving as foreign minister angered China by calling it a military threat, said it was too soon for him to comment.

The leadership change comes just as the government has opened its battle in parliament over the Indian Ocean naval mission, which the opposition has vowed to defeat.

Japan's navy has been providing fuel for coalition warships in the Indian Ocean since November 2001 under an anti-terrorism law that has already been extended three times. The legislation is a key issue before the special parliament session that opened Monday.

Although polls show public opinion is split on the issue, the government should eventually be able to push through the legislation because the Liberal Democrats control the lower house, which can override a "no" vote by the upper house.

The United States has turned up the pressure on Japan to extend the mission. U.S. Ambassador Thomas Schieffer met with officials earlier Wednesday to make Washington's case.

White House spokesman Tony Snow declined to comment on the leadership change, but noted Japan is a key U.S. ally. "We continue to work closely with the Japanese on a whole range of issues, obviously, and we will continue to do so," he said.

The resignation climaxes a rapid fall for Abe, who was the hand-picked successor to the wildly popular Koizumi. Abe swept into office with ambitious plans to revise the 1947 pacifist constitution and bolster Japan's role in international affairs.

Abe, whose grandfather was a prime minister and father was a foreign minister, initially met with success in fence-mending trips to China and South Korea. He also passed laws bolstering patriotic education and upgrading the Defense Agency to a full Cabinet-level ministry.

But the string of scandals quickly sapped public support.