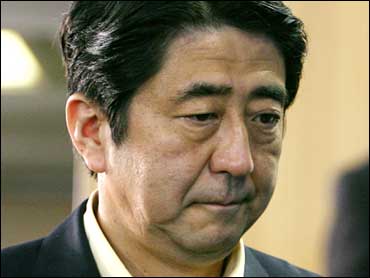 Japanese Prime Minister Shinzo Abe announced Wednesday he will resign, ending a troubled year-old government that has suffered a string of damaging scandals and a humiliating electoral defeat.

Abe said he was quitting to pave the way for ruling and opposition parties to work together to approve the extension of Tokyo's naval mission in support of the U.S.-led operation in Afghanistan.

"In the present situation it is difficult to push ahead with effective policies that win the support and trust of the public," Abe said in a nationally televised news conference. "I have decided that we need a change in this situation."

Abe, a nationalist whose support rating has plunged to 30 percent, also cited the ruling party's defeat in July 29 elections, in which the opposition took control of the upper house of Parliament.

The prime minister said he had instructed ruling party leaders to immediately search for a replacement, but he did not announce a date for his departure from office. His former foreign minister, Taro Aso, is considered a front-runner to replace him, though Aso said it was too soon for him to comment.

The ruling Liberal Democratic Party announced it would use a streamlined election process to choose a successor. Kyodo News agency reported the party planned an election for LDP president next Wednesday.

The party leader is guaranteed election as prime minister because of the LDP's control of the powerful lower house of Parliament.

The sudden resignation came less than a month after Abe reshuffled his Cabinet in a bid to recover public support. He had been adamant that he would not step down to take responsibility for the LDP electoral defeat.

Abe announced his departure just as the government faced a battle in Parliament over whether to extend the country's refueling mission in the Indian Ocean. Just days earlier, he said he would quit if he failed to win parliamentary passage of legislation extending the mission.

On Wednesday, Abe suggested that his departure could aid bipartisan passage of the bill.

The United States has turned up the pressure on Japan to extend the mission. U.S. Ambassador Thomas Schieffer met with Cabinet officials, including Foreign Minister Nobutaka Machimura, earlier Wednesday to make Washington's case for extension.

The plenary session of the lower house was to be delayed until at least Friday, and the opposition criticized Abe for quitting just as the session was to heat up.

"I've been a politician for nearly 40 years, but I think this is the first time that a prime minister has remained in office after the ruling party lost a majority ... and expressed his resignation right before parliamentary questioning," said Ichiro Ozawa, leader of the opposition Democratic Party of Japan.

Abe's resignation marked a rapid fall from power for a prime minister who came into office a year ago with ambitious plans to repair frayed relations with Asian neighbors, revise the 1947 pacifist constitution, and bolster Japan's role in international diplomatic and military affairs.

The prime minister, whose grandfather was premier and whose father was a foreign minister, initially met with success in fence-mending trips last autumn to China and South Korea. He also passed laws bolstering patriotic education and upgrading the Defense Agency to a full ministry for the first time since World War II.

But a string of scandals starting late last year quickly eroded his support. Four Cabinet ministers have been forced to resign over the past nine months, and one - his first agriculture minister - committed suicide over a money scandal.

Abe's government also has been fiercely criticized over some 50 million missing pension records.

Support for the political blue-blood was also damaged by his concentration on ideological issues - such as patriotism and constitutional reform - at a time when many Japanese are concerned over the widening gap between rich and poor and other bread-and-butter worries.

In such a weakened state, Abe may have feared he wouldn't have the clout to win passage of the Afghan mission, said Eiken Itagaki, a political analyst and writer.

"He has run out of political capital," Itagaki said. "So he bolted, in the hope that a more experienced successor can save the mission, and sort out the mess."

It also was a sharp reversal of fortunes for the ruling party, which has controlled Japan almost uninterruptedly since it was formed in 1955. Abe succeeded the wildly popular Junichiro Koizumi, who led the LDP to a landslide victory in elections for the powerful lower house in 2005.

Though Aso is considered a front-runner to succeed Abe, it is not clear whether he has the political clout and popular support to stop the LDP's slide in popularity.