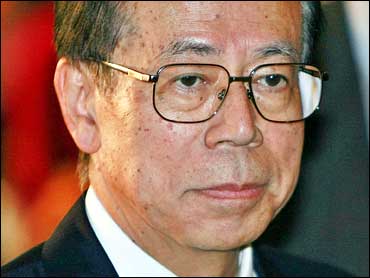 As a measure of the troubles that await Fukuda, 71, the Diet, Japan's parliament, split over his election, with the lower house supporting him but the upper house choosing an opposition leader. Under parliamentary rules, the lower house decision triumphed.

Fukuda took over from Shinzo Abe, a nationalist who lasted barely a year in office after a drumbeat of damaging scandals and the ruling Liberal Democratic Party's loss in upper house elections in July discredited him and his party.

Fukuda, the first son of a prime minister, acknowledged the difficulties ahead, calling for the kind of discipline he had to enforce as chief Cabinet secretary from 2000 to 2004.

"The situation surrounding the LDP is very severe, and we face difficulty in keeping the government under control without cooperation from all party members," Fukuda told reporters after the election.

Fukuda has pledged to keep Japan as a strong U.S. ally in the fight against terrorism, improve relations with Asia, and provide assistance to rural areas left behind in Japan's economic recovery. He also faces mounting calls by the opposition to call snap elections for the lower house, where the LDP rules.

"We are determined to tackle the many challenges we face together," Machimura told reporters after announcing the new Cabinet.

Fukuda's first order of business will be winning passage of legislation extending Japan's naval mission in the Indian Ocean in support of U.S.-led forces in Afghanistan. The opposition, which controls the upper house, has vowed to defeat it.

In the vote for prime minister, Fukuda garnered 338 ballots in the lower house, many more than the 239 needed for a majority, thanks to votes from the LDP and its coalition partner, the New Komei Party. His closest competitor was Ichiro Ozawa, the leader of the opposition Democratic Party of Japan, with 117 votes.

The upper house, however, gave Ozawa 133 votes to Fukuda's 106, setting in motion a lengthy procedure that finally concluded with the lower house decision being upheld. It was the first time since 1998 that the chambers have split in choosing a prime minister.

Ozawa suggested his main goal was bringing down LDP rule rather than negotiation with Fukuda, though he said he would join in talks.

"If it's the continuation of LDP and New Komei coalition rule, whoever becomes the prime minister doesn't make any difference," Ozawa said. "They are the ones that caused social disparity and distortion. We want to bring an end to such government as soon as possible."

Abe stunned the nation when he announced Sept. 12 that he wanted to quit, and checked into a hospital the following day for unspecified stress-related abdominal complaints. He ended a long bout of silence when he told reporters on Monday that he quit because of ailing health.

"I want to extend my apologies to the people for not being able to complete my duties," Abe said Tuesday in a statement that outgoing top government spokesman Kaoru Yosano read to reporters following the Cabinet's final meeting.

Though popular at the outset of his term, Abe's public approval ratings had fallen to about 30 percent. Four Cabinet ministers resigned in money-related scandals, and an agriculture minister committed suicide in May.

A final blow came when he led the LDP to elections in July in which they lost control of the upper house to the opposition - a defeat that has ignited growing calls to hold snap elections for the lower house to further test the LDP's popularity.

Fukuda, whose father Takeo Fukuda served as prime minister from 1976 to 1978, is known as a steady, experienced hand in political negotiations. He served as chief Cabinet secretary in 2000-2004, but had to resign after saying he had unwittingly skipped payments to the national pension system.

Few in Japan expect Fukuda to have an easy spell in office.

"The LDP chose its new leader, but the party crisis is not over," the national Mainichi newspaper said in an editorial. "Fukuda must live up to his words that the government and the LDP will start over anew."