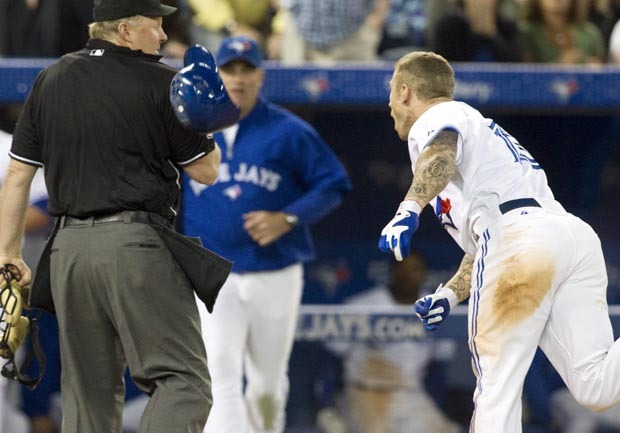 (CBS/AP) TORONTO - Brett Lawrie wasn't exactly contrite. When the Blue Jays infielder heard the penalty, he expressed just one regret about his tantrum: that his batting helmet bounced up and hit an umpire.

Major League Baseball suspended Lawrie for four games and fined him an undisclosed amount Wednesday, a day after the Toronto third baseman got into an altercation with umpire Bill Miller (see incident below):

Lawrie initially appealed but later dropped the appeal. The teams says the 22-year-old Lawrie has apologized to Miller.

"The only thing I would change is maybe not throwing the helmet or any equipment toward the umpire because you can get an unlucky hop and have the kind of mess that's going on right now," he said.

Lawrie was in the starting lineup Wednesday night against the New York Yankees — with the same umpiring crew in town, Miller was stationed in close proximity at third base.

Lawrie received the loudest cheer in pregame introductions and the umpires were booed when their names were posted on the scoreboard. He did not speak with Miller upon taking his position for the top of the first, and quickly ran off the field after the inning ended.

"I'm just playing the game the way I've always played it," Lawrie said. "That's the passion I have for the game and I don't feel like I need to change anything."

Lawrie, born and raised in Canada, is in his first full season in the majors. Miller became part of the MLB umpiring staff in 1999.

The trouble began Tuesday night in the ninth inning in a game Toronto lost to Tampa Bay 4-3. Lawrie started toward first base after he thought a 3-1 pitch missed, but Miller called it a strike.

On a full-count pitch that he believed was ball four, Lawrie again headed toward first base. When Miller called strike three, Lawrie momentarily crouched in disbelief. Lawrie dropped his bat, gestured at Miller and shouted, and was ejected.

Lawrie then started toward Miller, wound up with his right arm and slammed down his helmet. It bounced at the umpire's feet and ricocheted up into him.

"That's a bit extreme," Miller said after the game.

As Miller walked off the field, he was hit in the shoulder by a drink thrown by a fan.

Both Blue Jays manager John Farrell and general manager Alex Anthopoulos said they would not try to curtail the exuberance of their infielder.

"He's an energetic player, we don't want him to lose that energy and that passion for the game, that will to compete and do whatever he has in his power at the moment to make an impact on the game," Farrell said.

Anthopoulos said he would "never begrudge a player for being upset and being a competitor."

"That's just part of the game," he said. "I don't fault anybody for that."

Anthopoulos approached Lawrie as he stood next to the cage during batting practice. The two spoke briefly, with Anthopoulos patting Lawrie on the shoulder several times before walking away.

Lawrie then returned to the clubhouse to speak with his manager and GM in Farrell's office before returning to the field to face the media as news of the suspension was made official.

Lawrie said he looked forward to the hearing as a chance to tell his side of the story.

"The only thing I regret is the helmet hitting him," Lawrie said. "I never meant to do that and it shows ... it took a bad hop and it hit him just totally by accident."

"I don't have any intentions of hurting anyone," he said. "I was just frustrated at the play at the time."

While conceding that Lawrie had made "a bad choice" in slamming down his helmet, Anthopoulos stressed Lawrie's lack of intent, and the misfortune that Miller happened to be struck.

"He knows he shouldn't throw his helmet, it goes without saying," Anthopoulos said. "Everyone knows he didn't throw it at anybody, it happened to bounce and hit someone. If he had turned a little to his right or a little to his left, I think you're probably not even involved in any type of suspension."

"It's not like you're recounting a story over the phone of, 'You won't believe what happened,"' he said.

Anthopoulos deflected the suggestion that Miller's strike calls were motivated by spite after Lawrie headed toward first base.

"I don't think the umpires would ever do their jobs that way," he said. "I think, from that standpoint, you can look back at the film, like we all can in hindsight and 20-20, and we can obviously see if they're balls or strikes. That's very easy to look at in hindsight. I'm not sitting back there behind the plate and I know how hard that job is so I would never accuse anybody of doing that."