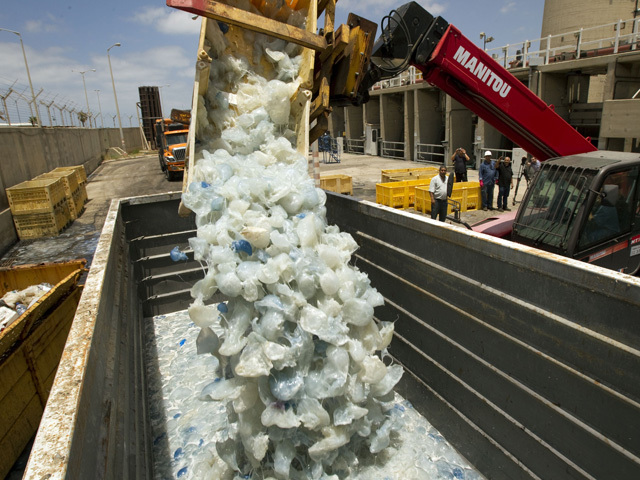 Last month both reactors at a nuclear power plant in Scotland were shut down after large numbers of jellyfish clogged their sea water filters. A week earlier, jellyfish infiltration crippled a reactor in Shimane, Japan. Then this week a nuclear power plant on the coast of Israel encountered a similar problem when the jellyfish got sucked into the cooling system, temporarily interrupting the plant's steam production.

Another sign that something's increasingly wrong with Mother Nature? To be sure, some will add the jellyfish phenomenon to the list of weird environmental phenomena taking place the last few years. However, scientists, who have only recently started tracking jellyfish populations, are also suggesting a less ominous - and, from a news perspective,sadly - less apocalyptic explanation.

This is the season for jellyfish blooming, which starts in the springtime and lasts throughout the summer. What's more, there are other instances of jellyfish getting sucked into pipes and  temporarily mucking up the works at plants built along the shoreline. Life's Little Mysteries has a good writeup of this phenomenon  where it quotes a Monterrey Bay Aquarium researcher recalling how one power plant in Australia was shut down by jellyfish as long ago as 1937.

However, let's not to be too cavalier.. Marine biologists note that jellyfish populations do well in warmer waters and scientists have confirmed an increase in ocean temperatures over the last couple of decades. If that trend doesn't reverse itself, the number of jellyfish-related incidents at nuclear plants may very well increase in coming years.