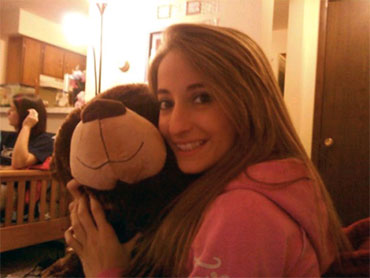 Jenni-Lyn Watson went missing over a week ago, after coming home from Mercyhurst College in Erie, Pa., to upstate New York for her Thanksgiving break.

Police have searched more than 1,200 acres around her home where she was last seen - and have found no sign of her.

Police are looking for a dark colored pickup truck in connection with her disappearance.

Undersheriff Warren Darby, of Onondaga County, told CBS News, "We're working under the assumption that we're going to find Jenni-Lyn and bring her home safely. That's our goal, that's what we would like to have happen."

Just before her disappearance on November 19, there was cell phone activity in a wooded area near where Jenni-Lyn vanished. The cell phone is now off, and her purse and wallet left at home. Police are asking for help to find the driver of a mysterious dark pickup truck seen nearby.

Darby told reporters, "As time continues, there is a timeline where that becomes a criminal investigation rather than just a missing person."

Friends say it's uncharacteristic for the 20-year-old dance major to simply disappear.

Tori Scott, Jenni-Lyn's friend, said, "This is very uncharacteristic of her to just get up and not contact family or anything. I'm just still in shock and don't know what to even think."

For the last week her friends and family have been passing out flyers and praying for her safe return.

Brad Weisenseel, a Mercyhurst College junior, told CBS News, "We just hope tonight that we get the call that she's home."

Scott said, "We just want to find her safe - and alive."

Quijano added professional search-and-rescue teams, as well as law enforcement personnel are looking for Watson. Officials say they plan to continue searching through the weekend.

On "The Early Show on Saturday Morning," Casey Jordan, a criminologist, said officials are getting more alarmed because of the amount of time that has passed since Watson was last seen.

"This is why after a week we are getting more and more alarmed because the family says they are close and it is not characteristic of had her to take off, she would at least leave a note would, not get in the car and drive to a concert, she's not involved in drugs. Nothing seems right about her disappearance.

Jordan said a message trail - if there is one - could be of particular interest to investigators.

"The cell phone signal, and they are just calling it activity, we don't know if it was a signal or calls were made, texts were sent, they are being very closed-lipped about the cell phone activity. That's all that's missing, your right her purse, her keys left at the house. We don't know if she had her coat, whether she had access to a car, there are so many questions that are just not answered."

Jordan said investigators may not be focusing on Watson's love life.
She said, "Well, they are just now beginning to focus on some reports from friends of hers at college she had a boyfriend, some man who wanted to marry her, and perhaps there was a bad break-up with that. They've been at an extreme disadvantage in that it is Thanksgiving break. College isn't in session. They can't run to Mercyhurst College and interview her friends because they're not there. The interesting information that there could have been a bad relationship, one of the friends described the break-up as bad and the guy is stalkerish, I think that's the direction they're going in now."

Jordan added there are many things the police have not released yet to the public.

"So many things they are not explaining," she said. "I don't know how she got home from the Thanksgiving break from college, did somebody drop her off, did she drive herself? What was the state of her luggage? Was it, you know an exploded suitcase? They say there was no sign of a struggle, but a lot they are not telling us. Let's hope the investigation is going better than we know.

"Early Show" co-anchor Chris Wragge remarked, "When someone is missing for seven, eight days like this, is it usually a bad - I mean, is it a worse sign?"

Jordan replied, "Statistically, it's not good. It is less and less likely as time goes by the person will be recovered alive but we have great stories, Elizabeth Smart, among them. Of people who are recovered alive so there's always reason for hope."