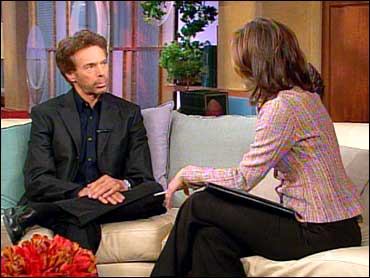 Super-producer Jerry Bruckheimer has the Hollywood Midas touch. He has nine shows on network TV, including mega-hit "CSI," "Without a Trace" and "The Amazing Race," among others. And his movies have earned more than $13 billion worldwide.

Bruckheimer's latest big-screen effort is "Glory Road," an uplifting look at how sports can break down barriers.

It's the true story of the Miners of Texas Western, a little known team from El Paso that beat the powerhouse Kentucky Wildcats in the NCAA basketball championship game in 1966.

But there was much more to this story than just the underdog pulling off an upset. It helped break the racial divide that was still very evident in college sports in the '60s.

The film tells of Don Haskins, who left his job as coach of a local high school girls' basketball team in Oklahoma to coach the Miners.

He aggressively recruited in a color-blind fashion, heading into the inner-cities of Detroit and New York, where basketball was still a hotly-contested, up-tempo street game.

Ultimately, Haskins forged an integrated team that was, in a rare change for a Southern university, predominantly black. With his tough-love style of coaching, Haskins brought his men together for a dream season, leading his squad to the NCAA tournament, where they topped Kentucky to win the 1966 Championship.

The story was part of the larger civil rights movement in the '60s.

On The Early Show Friday, Bruckheimer
told
co-anchor Hannah Storm, "Back in 1966, '65, there were no African-Americans playing in the South, or the Atlantic Coast Conference, and very few in the North. The unwritten rule was, in the North, you played one (African-American) at home, two on the road, and three if you're losing. That's what the coaches did."

But in the championship game, Bruckheimer says, Haskins "started his five African-American players, which was unheard of in those days. I think he felt, besides he felt they were his best athletes, but a white player had won the game before that for him and got him to the final game, and he never played him in the (championship) game.

"When (Haskins) was growing up, a friend of his was an African-American. Haskins got the opportunity to go to college. His friend never did. And I think it really wore on him. Even though he'll tell you today 'No, I just wanted to start my best guys and that's what I did,' I think it goes back to his childhood."

"You see how these young men sacrificed, the abuse they took, playing on a national stage like that," he says. "You're sitting on a bench, and behind you are the fans. The fans, when they went out of town, were so abusive. They poured things on them. He had a hard time stopping his players from turning around and jumping into the stands and hitting somebody. It was so awful for these kids.

"When you get to that level, the national championship game, that's hard enough. Yet, you look around, everybody's white. The cheerleaders are white. The referees are white. The crowd is mostly white. And you're there by yourself. And this team was so tough, so molded by Don Haskins, because his practices were so hard that they looked forward to the games."

Bruckheimer says the actors in the film were also pushed.

"We put them through boot camp," he says. "These actors were all basketball players except one. Every one of them had played high school, college or professional basketball. So the basketball is phenomenal in this movie. A lot of NBA teams have screened the movie. Lebron James is a big fan of the film, as is Shaq (Shaquille O'Neill) and Dwayne Wade. And Pat Riley was on the opposing team in Kentucky and played in that game."

Bruckheimer and Riley Are friends.

Usually, Bruckheimer goes for big names to star in his movies. Why did he opt for the lesser-known Josh Lucas to play Haskins?

"He's a wonderful actor and a wonderful individual," Bruckheimer says. "He worked so hard. He spent so much time with the real Don Haskins, the real players. Pat Riley talked to him for a long time."

"Just hiring great people," he says. "Working with great people. We have great show runners. They create the shows. They run themselves. They're just phenomenal."

Bruckheimer is working on two sequels to "The Pirates of the Caribbean," and on the first movie filmed in New Orleans since Hurricane Katrina, "Déjà vu," with Denzel Washington, which Bruckheimer describes as a crime-love story.