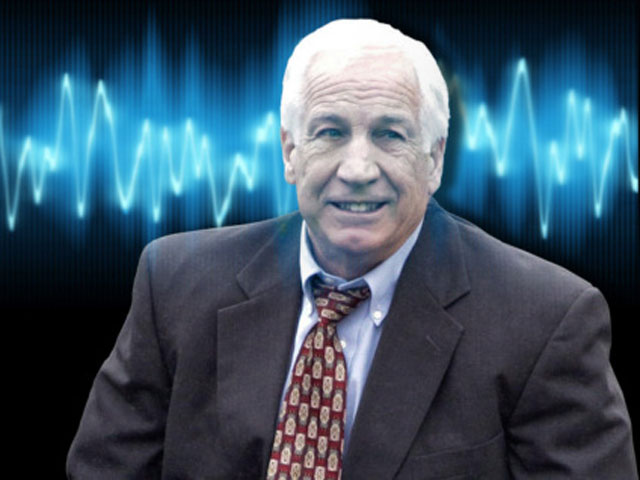 (CBS/AP) A man who claims he was "Victim 2" - the boy assaulted in a Penn State shower by Jerry Sandusky - intends to sue the university for its "egregious and reckless conduct," his lawyers said Thursday.

The lawyers said in a statement they have gathered "overwhelming evidence" of the abuse, and they released recordings of two voicemails they say were from Sandusky last year, both saying "love you" to the victim.

The voicemails are dated Sept. 12 and Sept. 19, 2011, less than two months before the former assistant coach was arrested on child sex abuse charges.

The second voicemail asks whether Victim 2 would like to attend Penn State's next game.

Sandusky left "numerous" voicemails for their client in the fall of  2011, the attorneys said.

The statement from the attorneys said Victim 2 suffered "extensive sexual abuse over many years both before and after the 2001 incident."

In the recording of a pair of voicemails released with the statement and posted online by the lawyers, a voice that purportedly is Sandusky's expresses his love and says he wants to express his feelings "up front."

The identity of so-called Victim 2 has been a central mystery in the case.  Jurors convicted Sandusky last month based largely on the testimony of former Penn State graduate assistant Mike McQueary, who described seeing the 2001 attack.

Sandusky awaits sentencing on 45 counts of child sex abuse.  A scathing independent review has said several top Penn State officials looked the other way after complaints of his abuse because they were afraid of bad publicity.

"Our client has to live the rest of his life not only dealing with the effects of Sandusky's childhood sexual abuse, but also with the knowledge that many powerful adults, including those at the highest levels of Penn State, put their own interests and the interests of a child predator above their legal obligations to protect him," the attorneys' statement said.

The victim is not named.

The university said in a statement that it is taking the case seriously but cannot comment on pending litigation.

The voicemails are available to listen to on the website of Ross Feller Casey, LLP., the firm whose lawyers are representing Victim 2. The law firm did these transcriptions of the voicemails:

"...Jere. Um. I am probably not going to be able to get a hold of anybody. Um. Uh. Probably ought to just go forward. Uh. I would be very firm and express my feelings, uh, upfront. Um. But, uh, you know, there is nothing really to hide so. Um. If you want, give me a call. You can call me on my other cell phone or on this one, either one so. Alright, take care. Love you. Uh. Hope you get this message. Thanks."

"...Just calling to see you know whether you had any interest in going to the Penn State game this Saturday. Uh. If you could get back to me and let me know, uh, I would appreciate it and when you get this message, uh, give me a call and I hope to talk to you later. Thanks. I love you."