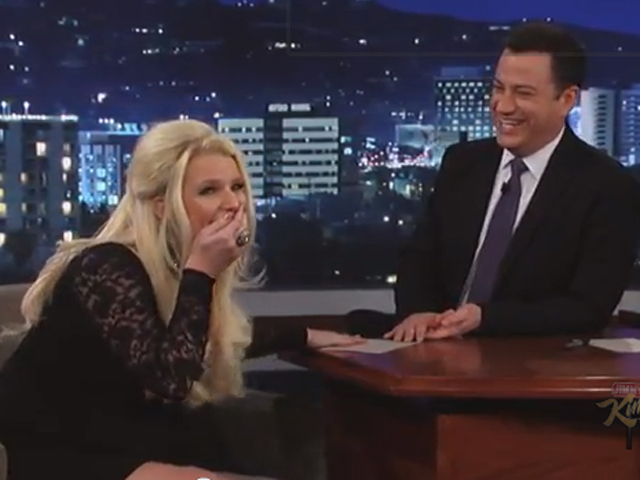 Jessica Simpson sure found a humorous way to let it slip that she's expecting a boy.

The pregnant "Fashion Star" judge paid a visit to "Jimmy Kimmel Live!" on Wednesday and opened up about her pregnancy woes, saying she feels "awful" and revealing she's been vomiting a lot more during her current pregnancy as compared to her first. Perhaps a bit of over-sharing, but the real fun came when she blurted out, "The crazy thing is I never knew a wiener could make me nauseous!"

Kimmel started cracking up, and Simpson realized what she had just done. But Kimmel didn't exactly get it, asking, "What did you intend to say there?" Simpson replied, "Well, I guess I just told the world that I'm having a boy!"

"Oh, I didn't even know what was happening! Maybe you were having a girl with a penis, I don't know!" Kimmel said. "Well, congratulations."

One person who did predict Simpson was pregnant with a boy was Ellen DeGeneres. During Simpson's visit to "The Ellen DeGeneres Show" this week, the host insisted on it.

Simpson and her fiance, Eric Johnson, are already parents to daughter Maxwell.

The second season of "Fashion Star" premieres Friday at 8 p.m. ET on NBC.

Watch part of the Jimmy Kimmel interview below: