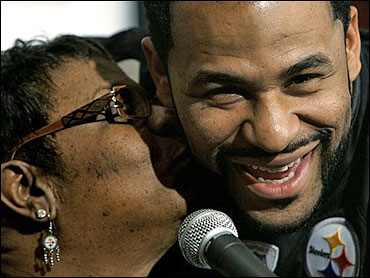 Tired of trying to help the NFL's weaklings salvage their seasons, the New York Jets showed their power Sunday to the Carolina Panthers. And to the rest of the league.

In a superb display of dominating offense and defense, the Jets (8-4) routed the struggling Panthers 48-21 to hold onto first place in the AFC East. New York won its fifth straight home game for the first time in 12 years by responding to the coaching staff's warnings not to overlook the opponent the way it did in losses to Baltimore, St. Louis and Indianapolis.

"It's something we had to do in our quest to be a good team," said Curtis Martin, who ran for scores of 60 and 1 yards. "The best way I can describe it is having killer instinct."

Martin gained 107 yards and went over 1,000 for the year -- the fourth time in as many NFL seasons he's done that. The expensive free agent signed away from New England in the off-season has 1,039 yards rushing.

"We showed ourselves we can do it against these teams, too," added Wayne Chrebet, who caught TD passes of 36 and 21 yards from Vinny Testaverde, who was 16-for-21 for 255 yards. "We're coming down to the last quarter of the season and that's what you have to do. This is the first sign we're serious about what we have to do."

It also has been a dozen years since the Jets scored so many points.

"This is an explosive offense," said Chrebet, who had seven catches for 107 yards. "When the line is blocking like that, we can do whatever we want."

New York also dominated defensively, allowing 216 yards -- many with the game decided -- and getting five sacks against the inept Panthers (2-10), who had split their last four games and were playing opponents tightly before Sunday's lopsided defeat.

Bryan Cox, mired in controversy after being fined $10,000 by the league for two illegal hits in last week's game, sacked Steve Beuerlein in the end zone for a safety.

"It was a strong game all-around," Cox said. "You have to show teams how serious you are and we did."

Martin's second-longest career run put the Jets ahead 10-7. He swept right, broke two tackles before heading down the sideline, then cut back into the end zone for a 60-yard score.

Johnson's first carry of his three-year career also got him a touchdown. Behind superb outside blocking by center Kevin Mawae and fellow wideout Dedric Ward, Johnson ran 35 yards to make it 19-7. A pass to Johnson for a 2-point conversion was incomplete.

"It's hard for me to give you anything positive about the way the Panthers played today," coach Dom Capers said. "I am embarrassed."

Confusion on the Jets defense led to two Carolina touchdowns.

New York twice was late getting its personnel on the field. In the first quarter, on third-and-11 at its 19, it created a mismatch and Raghib Ismail sped past safety Jerome Henderson for a 62-yard completion. Fred Lane scored from the 1, giving Carolina a 7-3 lead.

Wesley Walls, uncovered in the end zone at the end of a 79-yard drive in the third quarter, caught a 2-yard scoring pass after much defensive confusion.

Fred Lane ran for a 2-yard score in the fourth quarter.

"Some days it goes like this," Beuerlein said. "It was a huge disappointment."