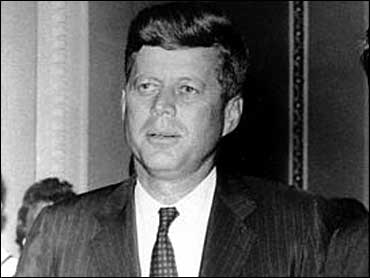 President John F. Kennedy suffered more pain and illness than previously known, and took as many as eight medications a day, according to a published report.

Newly disclosed medical files from the last eight years of Kennedy's life, including X-rays and prescription records, show he took painkillers, anti-anxiety drugs, stimulants and sleeping pills, as well as hormones to keep him alive, according to a story for Sunday editions of The New York Times.

The records were revealed by historian Robert Dallek, who is writing a biography, "An Unfinished Life: John F. Kennedy, 1917-1963," to be published next year by Little, Brown.

Dallek was allowed to examine the documents last spring by a committee of three longtime Kennedy family associates, who for decades refused all requests to look at the records. He reviewed the documents with the assistance of physician Jeffrey A. Kelman, but was not allowed to make photocopies, the newspaper said.

Their findings appear in the December issue of The Atlantic.

As president, Kennedy was famous for having a bad back, and since his death, biographers have pieced together details of other illnesses, including persistent digestive problems and Addison's disease, a life-threatening lack of adrenal function, the newspaper said.

The records reveal that Kennedy variously took codeine, Demerol and methadone for pain; Ritalin, a stimulant; meprobamate and librium for anxiety; barbiturates for sleep; thyroid hormone; and injections of a blood derivative, gamma globulin, presumably to combat infections.

The new information also shows Kennedy went to great lengths to conceal his ailments, even denying to reporters that he had Addison's disease. Other presidents, such as Franklin D. Roosevelt, also kept their illnesses secret.

Writing in The Atlantic, Dallek said while Kennedy's secrecy can be taken as "another stain on his oft-criticized character," the records also reveal the "quiet stoicism of a man struggling to endure extraordinary pain and distress."