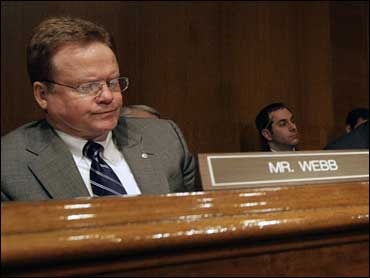 As the Associated Press notes, Secretary of State Hillary Clinton recently announced that the Obama administration will engage in direct, high-level talks with the leaders of the military-run government of Myanmar, also known as Burma.

Webb will meet with Gen. Thein in New York City, where Thein is addressing the United Nations General Assembly. His appearance there marked the highest-ranking address from a member of the Burmese government in 14 years.

Thein said at the U.N. that his country is making a "transition to democracy" and is taking "systematic steps to hold free and fair elections." He criticized the west for sanctions against Myanmar, calling them an "unjust" political tool, according to the AP.

The United States and other countries have established and pressed for sanctions against the country over its human rights record and unwillingness to turn power over to the National League for Democracy party, which was democratically elected in 1990.

Webb, the chair of the Senate Foreign Relations East Asia Subcommittee, went to Myanmar over the summer, where he met with leaders and won the release of the American who swam to the house of political prisoner Aung San Suu Kyi.

Assistant U.S. Secretary of State Kurt Campbell told reporters Monday that direct engagement between the U.S. and Myanmar comes after the latter country's military leaders reached out for the "first time in memory."

U Win Tin, the founder of the National League for Democracy party and a longtime political prisoner, has called Webb's efforts "damaging to our democracy movement."