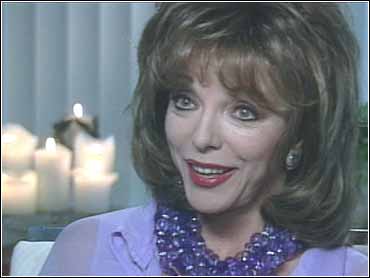 There is something wonderfully and welcomingly old fashioned about Joan Collins. She is one of the very few real stars that we have left. Wherever she is, whatever she does, she tries just a little bit harder than the rest of us.

Joan is the only 68-year old I know who can look like a million dollars at Heathrow Airport, genuinely smiling while she's waiting for a flight to the South of France at seven on a cold British morning. The baggage handlers and the red caps melt when she's around. She knows her value. Well, Joan Collins got married on Sunday night here in London, and the great and the good turned out to wish her well. But not all of them. Michael Caine was there, Tim Rice and Roger Moore, but Jackie Collins, her sister, didn't show. She muttered something about "Joan and her men" and stayed at home. But Joan looked magnificent. Nolan Miller designed her wedding dress, just as he designed all those dresses for Alexis Carrington in the Dynasty years, though thank heavens, the shoulder pads have gone.

This is Joan's fifth marriage. The first husband went when she discovered he dyed his hair and wore mascara. The second, Tony Newley, Joan always said was too insecure to last. The third spent her money and the fourth, well, the fourth was a Swedish pop star who wasn't in Abba. It's a varied marital track record. So, there are some people who have been speculating how long this one, to a 36-year old theatre impresario called Percy Gibson, is going to last. But let's not be so ungenerous. Joan Collins starred in "Land Of The Pharaohs" in the same year that James Dean made "Rebel Without A Cause." And last year, she appeared in a version of "Moonlight Over Buffalo" that had her gallivanting around the stage of the old Vic theatre in London, in a basque and high heels... and she's still got great legs. She's a classy lady, Joan Collins. And like any real star, she still watches the pennies. Which I suspect, is why the picture rights for the wedding have been sold to various magazines for around nine hundred thousand dollars. And before you say "that's a bit tacky", I know what you mean. But this was her fifth wedding, her father is long gone, Joan's a great survivor and when a girl's got to pick up the tab for the reception!

Besides, you never know, there might be another one in a few years and there's a lot of life left in Joan Collins.