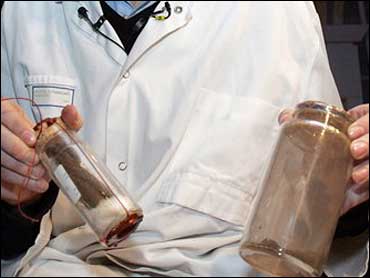 The supposed remains of 15th-century French heroine Joan of Arc are, in fact, those of an Egyptian mummy, says an international team of researchers who used high-tech science to expose the fake.

The rib bone, along with a piece of cloth and a cat femur, were said to have been recovered after Joan of Arc was burned at the stake in 1431 in the Normandy town of Rouen. Scientists in 1909 — the year Joan of Arc was beatified by the Catholic Church — had declared it "highly probable" that the remains were hers.

But starting last year, the 20 researchers from France, Switzerland and Benin took another look. Their finding — that the bone came from an Egyptian mummy — surprised even them. Their best guess is that the fake was cooked up in the 19th century, perhaps to boost the process of Joan of Arc's beatification. She was canonized as a saint in 1920.

In medieval times and later, powdered mummy remains were used as medicine, "to treat stomach ailments, long or painful periods, all blood problems," Philippe Charlier, who headed the team, told The Associated Press in a telephone interview.

So their assumption is that a 19th-century apothecary was behind the fake, and transformed "these remains of an Egyptian mummy into a fake relic, or fake historic remains, of Joan of Arc," he said.

Why remains a mystery.

"Probably not for money," said Charlier. "Perhaps it was for religious reasons. Perhaps it was created to increase the importance of the process of beatification in 1909."

Tests dated the bone to between the 7th and 3rd centuries B.C., he said. The cat bone dated from the same period and also was mummified. They also found pollen of pines, probably from resin used in Egyptian embalming, he said.

But they were unable to extract DNA from the remains, meaning they could not identify the sex of the mummy or the cat.

"The embalming products appear to have prevented the conservation of the DNA, and they are too old, so it didn't work," Charlier said.

Perfumers were called in as detectives. The researchers had them sniff the remains, using their exceptional olfactory senses "so they could identify the smells, the vegetable matter, in the embalming and guide our research," said Charlier.

The remains supposedly were recovered from Joan of Arc's pyre and conserved by an apothecary until 1867, before being turned over to the archdiocese of Tours.

Joan of Arc was tried for heresy and witchcraft and burned at the stake after leading the French to several victories over the English during the Hundred Years War, notably in Orleans, south of Paris.

The illiterate farm girl from Lorraine, in eastern France, disguised herself as a man in her war campaigns and said she heard voices from a trio of saints telling her to deliver France from the English.

The London-based scientific journal Nature was first to report that the team had concluded that the remains were from a mummy, not Joan of Arc.