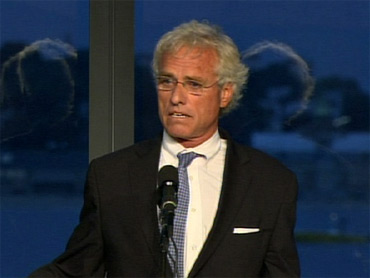 (CBS)
Joseph P. Kennedy II, the nephew of the late Massachusetts Senator Ted Kennedy, will not seek his uncle's U.S. Senate seat, according to a statement released today.

Kennedy, the oldest son of Robert F. Kennedy, is a former Congressman from Boston.

He announced his decision through a statement on the Web site of Citizen's Energy Corporation, the non-profit he founded in 1979.

"I want to thank the millions of Americans who have expressed their love and admiration for Senator Kennedy over the last few weeks. It was very moving to see so many people come out to pay their respects to a man who fought so hard to make this world a better place, especially for those struggling for life's basic needs — a decent home, a living wage, a safe neighborhood, their daily bread, a good education, and access to health care.

"Given all that my uncle accomplished, it was only natural to consider getting back involved in public office, and I appreciate all the calls of support and friendship that have poured in.

"My father called politics an honorable profession, and I have profound respect for those who choose to advance the causes of social and economic justice in elective office. After much consideration, I have decided that the best way for me to contribute to those causes is by continuing my work at Citizens Energy Corporation.

"Our efforts cover a broad array of the challenges facing this country — to heat the homes of the poor, install energy-savings technologies to cut costs for homeowners and businesses, build wind farms throughout the United States and Canada to lessen our dependence on foreign oil, and construct transmission lines to carry new sources of renewable energy.

"Over 30 years after starting the company, there is much yet to be accomplished at Citizens Energy, and I continue to be committed to our mission of making life's basic needs more affordable."