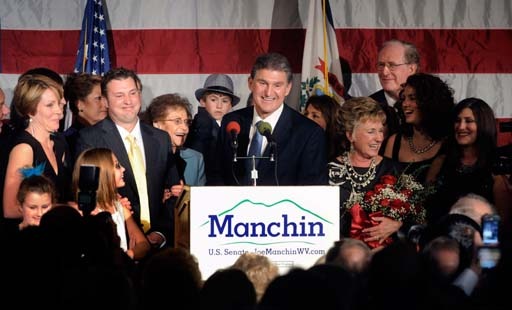 Republicans are doing everything they can to convince Joe Manchin, the Democratic senator-elect from West Virginia, to join the GOP, Fox News reports.

Manchin, the popular West Virginia Governor, faced a tough fight against Republican John Raese in his bid to become the state's junior senator this November. In that race, Manchin he went to great lengths to distance himself from the Washington Democratic establishment. (In one memorable campaign ad, he literally shot through a copy of the cap-and-trade bill with a gun.)

According to Fox, Republicans are now trying to woo the conservative Democrat to the other side of the aisle by promising him choice committee assignments and potentially even support for a power plant that would convert coal to diesel fuel.

"Republicans believe in an 'all of the above' approach to energy. And coal-to-diesel could certainly be part of that," according to an unnamed "top Senate aide" quoted by Fox. Manchin has so far seen little action by Democrats in response to his plight for funds to sponsor the coal conversion project.

But Manchin is seen as particularly vulnerable to GOP entreaties because he faces re-election in 2012 - and could have a tough time defending his party ties to President Obama, who is deeply unpopular in the state.

According to an unnamed Manchin adviser cited in the Fox News report, the Democrat currently has no plans to switch party affiliations - but the source did not close the door to a party swap in the event that "Democrats aren't receptive" to changes.

"He was elected as a Democrat and he has to go to Washington as a Democrat to try, in good faith, to make the changes in the party he campaigned on," the Manchin adviser told Fox News. "Now, if that doesn't work and Democrats aren't receptive, I don't know what possibilities that leaves open."

But Manchin spokesperson Sara Payne Scrarbo flatly refuted the possibility of a Republican shift, emphasizing in a statement that "Joe Manchin is a life-long Democrat and he is not switching parties."

"This is exactly what is wrong with Washington - individuals try to put politics before our nation," the statement reads. "Joe Manchin wants to go to Washington to encourage members of Congress to stop partisan bickering and start putting our nation's needs at the forefront. He wants to work with all sides - Democrats and Republicans - to move our state and nation forward. He is looking forward to going to Washington to do his part to help rebuild America."

Despite distancing himself from the Democratic Party in the months leading up to November's elections, Manchin benefitted from the help of popular Southern Democrats like Bill Clinton, who campaigned feverishly on his behalf.

In the unlikely event that Manchin, Nelson and Lieberman all switched parties, the Senate would be in a 50-50 deadlock (assuming a Republican win in the three-way Alaska Senate race). Per Congressional law, however, Democrats would still hold the chamber: the tiebreaking vote in a Senate stalemate goes to the Vice President - in this case Democrat Joe Biden.