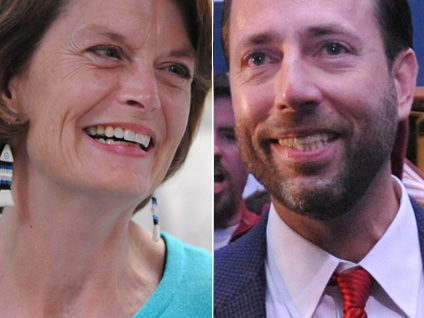 Republican Sen. Lisa Murkowski declared herself the victor in the Alaska Senate race on Wednesday, but her Republican challenger Joe Miller took action on Thursday to stop her victory from becoming official.

An attorney for Miller on Thursday asked a federal judge for a preliminary injunction to keep state officials from certifying election results, according to reports.

Thursday's injunction modifies Miller's original lawsuit challenging how the state handled Murkowski's write-in campaign, in which Miller argued it was illegal for the state to accept write-in ballots with any kind of errors.

According to the state tally, Murkowski has a lead of about 10,400 votes. Even if the state threw out all of the write-in votes Miller's camp challenged, Murkowski would still lead by more than 2,000 votes.

However, the Miller campaign is now arguing in its injunction that the volunteers they recruited to observe the vote count did not have enough time to be properly trained because the write-in vote tally started ahead of schedule.

"My campaign team and I were forced to pull together volunteer observers at the last minute, and did not have time to adequately and fully recruit and train them before counting began," Miller wrote, the Associated Press reports. "As a result, an indeterminate number of ballots with candidates' names misspelled were counted without being challenged during the first several days of counting."

"Throughout this election, Miller has blamed everybody else," he said. "Now he is blaming his own volunteers -- people who took nearly a week of their own to travel to Juneau and work on his behalf,"

Miller is also now questioning whether the state sent ballots out to voters overseas and in the military in a timely manner, according to the Dispatch.