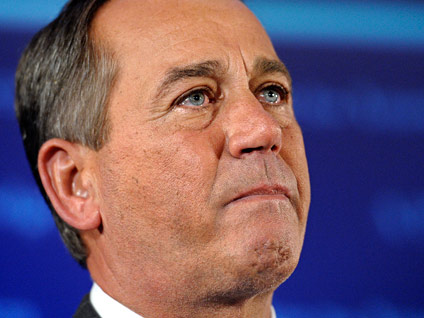 Rep. John Boehner, who will become speaker of the House in the new Congress, gave an emotional speech around midnight in which he argued that the American people have offered in the midterm elections "a repudiation of Washington, a repudiation of big government, and a repudiation of politicians who refuse to listen to the people."

The Ohio Republican argued that the American people sent a message to President Obama at the ballot box on Tuesday.

"We hope President Obama will now respect the will of the people, change course, and commit to making the changes they are demanding," he said.

"And to the extent he is willing to do this," Boehner added, "we are ready to work with him."

The speaking-in-waiting made it clear that Republicans are not planning to move in the president's direction, however.

"Make no mistake, the president will find in our new majority the voice of the American people as they've expressed it tonight: standing on principle, checking Washington's power, and leading the drive for a smaller, less costly, and more accountable government here in Washington DC," he said.

He added that it is no time for celebration with Americans out of work and "our children [buried] under a mountain of debt."

"This is a time to roll up our sleeves and go to work," he said.

Boehner began crying as he neared the end of the speech as he said he has "spent my whole life chasing the American Dream."

"I started out mopping floors, waiting tables, and tending bar at my dad's tavern. I put myself through school working odd jobs and night shifts," he said, his voice cracking. "I poured my heart and soul into a small business. And when I saw how out-of-touch Washington had become with the core values of this great nation, I put my name forward and ran for office."

President Obama called Boehner at midnight to congratulate him, in what Boehner's office described as "a brief but pleasant conversation." The White House has released a photo of the call, which is posted here.

According to the White House, he told Boehner and McConnell he is "looking forward to working with him and the Republicans to find common ground, move the country forward and get things done for the American people."