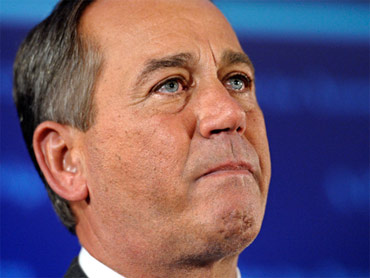 Got hankies? The next speaker is a weeper.

If soon-to-be-ousted House Speaker Nancy Pelosi is known for her steely smile and composure, her replacement, John Boehner, has a reputation for tearing up.

It starts with a quaver in the Ohio Republican's voice. Then there's a pregnant pause as he tries - usually unsuccessfully - to keep his feelings in check. Soon, he's choking out words in a rush of emotion, shaking his head and waving his hands as he tries to pull himself together.

It happened most recently when Boehner took his first turn on stage after Republicans seized control of the House in the midterm elections.

Boehner held it together until he got to the spot in his speech when he spoke of his humble origins as one of 12 children in a working-class family.

Then he started to lose it as he told the election-night rally, "I've spent my whole life chasing the American dream."

Soon he was pursing his lips and pressing a fist to his mouth as he tried to regain his cool while telling the crowd: "I put my - myself through school - working - every rotten job there was - and every night shift job I could find."

Instantly, Twitter was atwitter with speculation about whether the show of emotion by the "weeper of the House" was genuine.

It was vintage Boehner to those who know him.

Margaret Spellings, education secretary under former President George W. Bush, says Boehner used to get weepy at school events when they were pushing the No Child Left Behind education legislation.

"Everybody laughs about how he bursts into tears," Spellings said in an interview earlier this fall. "He'd always get choked up about the kids."

Former Rep. Jim Nussle of Iowa, who entered the House with Boehner in 1990, describes him as "one of the more sensitive people" in Congress.

"It's not unusual for him to be touched by a moment, a speech, a comment, whether it's from a constituent or a fellow member of Congress," Nussle said in a pre-election interview.

Boehner's not always a softy: He's delivered plenty of fiery speeches against President Obama and the Democrats. His "Hell no" tirade against the president's health care overhaul went viral on YouTube.

The speaker-in-waiting was asked at a morning-after news conference why he had cried on election night.

"It gets a little difficult to talk about my background or talk about my family," he said. "And I thought I was going to be in good shape, but not as good as - as it turned out."

It's not just school kids and family memories that go to work on Boehner's waterworks.

There's a YouTube clip of Boehner choking up on the House floor in May 2007 over war and terrorism, telling legislators, "I didn't come here to be a congressman." Catch in the throat. Pause. "I came here to do something. And I think at the top of our list, is providing for the safety and security of the American people." By now, his words are tumbling out in a torrent. "After 3,000 of our fellow citizens died at the hands of these terrorists, when are we going to stand up and take them on?"

Boehner's also choked up over the government's bailout of banks, abortion legislation and other issues.

(He's not much of a movie-watcher, so no word on how he fares during tear-jerkers like "Casablanca.")

With a weepy speaker-in-waiting, it's clear the country has a come a long way from 1972, when Edmund Muskie's presidential campaign went off the rails after it was reported that he had cried in response to a newspaper attack on his wife. Muskie went to his grave insistent that it had been melted snowflakes, not a tear, in his eye all along.

Fifteen years later, Democratic Rep. Pat Schroeder raised eyebrows by crying as she announced she would not be a presidential candidate, and she was still catching flak for it years later.

In 2008, Hillary Rodham Clinton, known as a cool character, generally drew admiration when she choked up during the final days before the New Hampshire presidential primary, telling voters, "This is very personal for me. It's not just political."

Political psychologist Stanley Renshon says it appears that "the idea of women as the fairer sex is slowly fading."

But he says that overall, it's still a good idea to consider the source when a politician gets weepy.