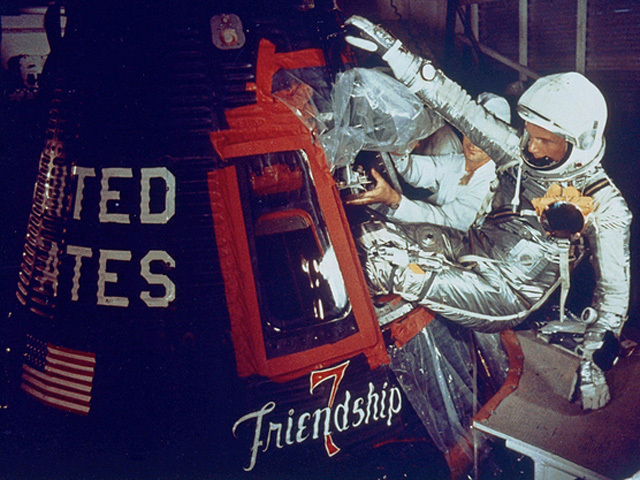 John Glenn, one of NASA's original seven astronauts and the first American to orbit Earth, joined another exclusive club today (July 18) -- the nonagenarians.

Glenn is celebrating his 90th birthday after a long and storied career as an American spaceflight icon. In 1962, he became the first American to orbit Earth, putting the United States back on even footing with the rival Soviet Union in the Cold War space race.

And 36 years later, Glenn -- by then a long-serving United States Senator -- became the oldest person ever to fly in space, launching aboard the shuttle Discovery on its STS-95 mission in 1998. Glenn was unavailable to speak with SPACE.com on the eve of his birthday, but his legacy is cemented in American history, space experts said.

"Glenn epitomized 'the right stuff,'" said space history expert Robert Pearlman, editor of collectSPACE.com and a SPACE.com contributor. "He will always be viewed as an American hero for what he did in space."

John Glenn was born in Cambridge, Ohio, in 1921. He entered the Naval Aviation Cadet Program in 1942, then joined the Marines in 1943.

Glenn flew 59 combat missions during World War II, then 90 more in the Korean War. After Korea, Glenn became a Navy test pilot. In July 1957, he set a transcontinental speed record, flying an F8U Crusader jet from Los Angeles to New York in just 3 hours and 23 minutes -- the first time such a long flight had averaged supersonic speed.

In 1959, NASA selected Glenn as part of its first-ever astronaut class. The so-called Mercury Seven were chosen from a pool of 508 high-flying, high-achieving military men.

Two of Glenn's Mercury Seven classmates -- Alan Shepard and Gus Grissom -- made it to space before he did, launching in May 1961 and July 1961, respectively. But Glenn's flight of Feb. 20, 1962 was arguably a more meaningful accomplishment for the nation's fledgling human spaceflight program.

Shepard and Grissom only reached suborbital space, but Glenn circled the Earth three times during his nearly five-hour mission aboard the Mercury capsule known as Friendship 7. With Glenn's mission, NASA and the nation matched the rival Soviet Union, which had launched cosmonaut Yuri Gagarin on an orbital flight 10 months earlier.

The Soviets had led the space race since its inception. They launched the first artificial satellite, Sputnik I, in October 1957. Gagarin also became the first person to reach space (as well as the first to orbit Earth) when he blasted off on April 12, 1961.

"For many, John Glenn's flight represented the first time that we caught up with the Russians," Pearlman told SPACE.com. "It represented a real challenge to what was being deemed a Soviet superiority in space."

A ticker-tape parade in New York City celebrated the man and his mission, and President John F. Kennedy gave him the Space Congressional Medal of Honor. Streets, schools and other buildings across the country were named in his honor. NASA's Glenn Research Center in Cleveland, Ohio, is named for the astronaut.

A political career -- and return to space

Glenn left NASA in 1964, his departure possibly hastened by a real or perceived lack of future spaceflight opportunities.

"There was pressure on NASA not to fly Glenn again," Pearlman said. "He was too valuable to the country" to risk losing him in an accident.

So, Glenn went into business, and then politics. He represented his native Ohio as a Democrat in the United States Senate from 1974 to 1999. During his tenure, he remained a staunch supporter of NASA and the American space program, Pearlman said.

Despite his career switch, Glenn wasn't quite done with spaceflight. He flew aboard the space shuttle Discovery's STS-95 mission in 1998, spending nearly nine days in space at the age of 77. Glenn thus became the world's oldest astronaut, a distinction he still holds.

Glenn's participation gave researchers the chance to investigate the effects of microgravity on the elderly. However, in some ways, he was not the ideal candidate for such a study, because he was in such good shape at the time.

NASA's space shuttle fleet is retiring this year after one final flight of the Atlantis orbiter, which is in space right now and due to land on Thursday (July 21). Last year, Glenn released a statement calling for NASA to keep flying its shuttles until an American-built replacement was ready. NASA currently plans to continue flying astronauts on Russian Soyuz capsules until privately built American spacecraft become available.

"For the 'world's greatest spacefaring nation,' this is hard to accept," Glenn wrote in 2010.

"A heavy-lift space workhorse to someday replace the Shuttles is a necessity for our space future," Glenn wrote. "The flexibility that gives to our manned and unmanned programs will be key to the world leadership as other nations develop their manned space capabilities."

The image of Glenn -- an icon, a larger-than-life spaceflight trailblazer -- will likely follow the man down through the years. It is how he will be remembered.

"Glenn's role in history is well-defined," Pearlman said. "He was more or less the all-American hero."