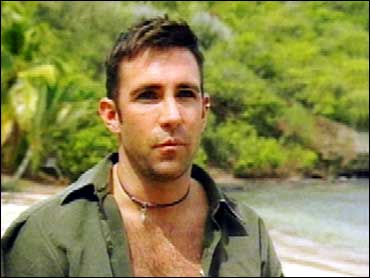 In a surprising twist, John Carroll, the 36-year-old registered nurse from Omaha, Nebraska, was voted out of the Soliantu tribe in a vote of 6-3. He spoke with Jane Clayson and Bryant Gumbel on The Early Show about his experience.

Clayson was interested in knowing what happened - hadn't John thought Neleh and Paschal were on his side?

Clayson: So Paschal gave you his word, but his word really wasn't good after all.

Carroll: I know. And he's a judge. What's up with that?

Clayson: Why do you think he and Neleh turned on you?

Carroll: Because they want a million dollars.

Clayson: You thought you had him, though.

Carroll: You know, it was really interesting. Because, there was a number of people that were not playing the game. And they really did not begin playing the game until day 24. And it was kind of bizarre, you know, as far as what was going on around them. But they really kind of were immune to everything that was going around. And then just all of a sudden, you know, the lights came on and unfortunately the lights went out for me.

Clayson wanted to know about Carroll's strategy, and about his relationships with Sean and Rob.

Clayson: So you believe you were playing the game from the very beginning.

Carroll: Oh, I was playing the game with my application.

Clayson: Which was the fourth time you sent your application in.

Clayson: You sent for the first three "Survivor"s and then finally you got in?

Clayson: Do you regret sort of proclaiming yourself the leader from the very beginning?

Carroll: Well, I never proclaimed myself as the leader.

Carroll: Those interviews are very creative as far as information they want to pull out of you. So, they get what they want.

Clayson: All right. All right. That's fair. You and Rob and Sean really got into it, didn't you? I thought it was going to be fisticuffs at one point.

Carroll: Actually at one time, I believe it was episode seven - I think Rob's last episode, there was a moment where I was like, this might turn into that. And I was trying to remember in my contract, if I hit him, do I get kicked out?

Clayson: Really? What was the fight about?

Clayson: You were also bothered by Rob outing you. Right?

Carroll: Well, I wasn't so much bothered by the actual outing. Because, you know, I'm 36. I've been out for a long time. The passive/aggressive way that he did it was kind of cheap, I thought. But after it happened, kind of off camera, he came and I think he had some remorse. And we talked. And I talked about what that kind of thing does. And the words that he has to say about gay people, what that can actually, you know, do to a person.

And then there was Sean, and the entertainment factor of the game.

Clayson: Do you regret the kiss-off that you gave him?

Carroll: No. Not at all. You know, when I signed that contract, I signed on to provide entertainment. I mean, besides trying to win the million, I knew that I was on a television show that provided entertainment to millions of people. So as far as I'm concerned, I did my part.

Clayson: Are you mad he outlasted you?

Carroll was pretty emotional in his good-bye remarks at the end of Survivor Thursday night.

Clayson: Tell us why you got so emotional last night. What was that all about?

Carroll: Oh, I'm just a big old mama's boy. My mom had this big joke as I went through the interview process and all of that. "I'm going to retire, you've got to win the million. I want to retire."

Clayson: So you felt like you let your mom down?

Carroll: I'm like mom, sorry, you have to keep working.

GumbelAre you proud of having lasted so long or proud of the way you played the game, or both?

Carroll: Both. Absolutely. I'm one of 16 people that were on "Survivor: Marquesas." I mean, how could -- nothing, whether I was voted off first or I won the million, I mean, just being a part of that experience was enough for me.

McKewan: John, you were an openly gay man. You talked about that earlier. Richard Hatch was, as well, and he won the first one around. How has "Survivor" been as a platform for people who may not be familiar with gay people in their lives to see gay people as just people?

Carroll: Well, I think it's interesting, because Rob obviously had some issues, you know, with my sexuality.

In private conversations, he said, Rob admitted that he really ever known a gay person before. "And, you know, Rob and I are friends now because of this experience," Carroll says.

Beside his memories of being on "Survivor" Carroll also brought back a permanent reminder of his time as a castaway. He, along with two other team members - whom he refused to name - got tattoos.

Carroll says the tattoos represent a sea turtle: "Now that I'm on the jury, I was able to tour the island. Had a few days. And there was a lot of hieroglyphs on the rocks and the sea turtles are like everywhere. And so the three of us got that to commemorate."