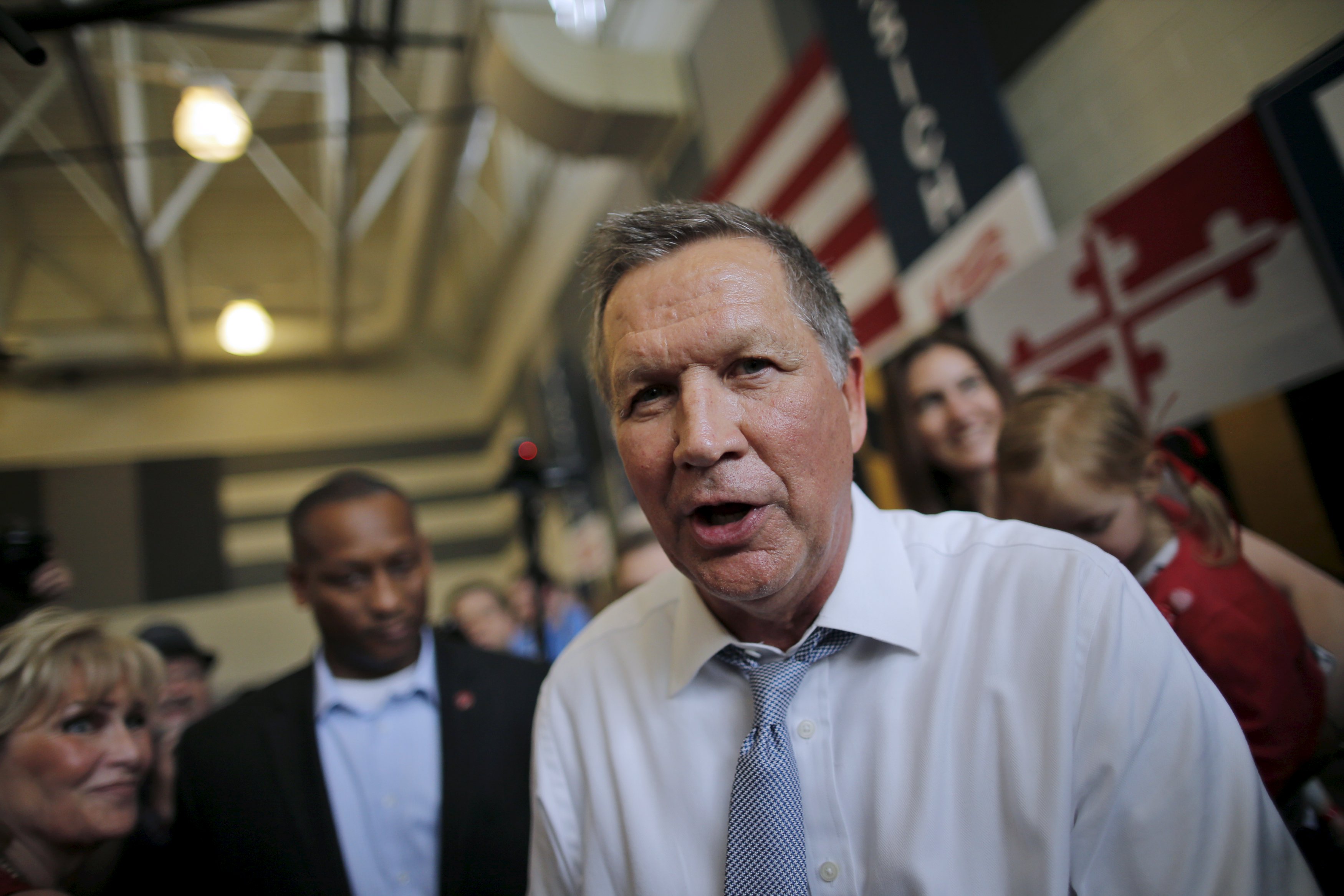 Ohio Gov. John Kasich may not have won a primary since his home state of Ohio back in mid-March, but he had a message for the voters and for his GOP opponents: despite calls for him to leave the race, he's not going anywhere.

"I'm still standing," he told a crowd at a town hall event in Portland, Ore., on Thursday.

Kasich spoke about his tenure in Congress, hearkening back to a time in American politics when the parties worked together and saying he wanted to bring back that kind of political process. He said he thought hard on Wednesday about whether it was time to call it quits.

"I thought about all that yesterday. And I made a determination that the people of this country deserve something," he said, noting he'd asked his wife whether he should continue his campaign.

"She said, 'The people need a choice, and if you don't give them the choice, who will?'" he said. "And so I've decided to keep going. And there are going to be people who are going to criticize me for that. And it's not always an easy road. I'm going to do my very best."

Kasich added that he's faced tough odds in the race, including being a relative afterthought in the initial, massive 17-person Republican field and being heavily outspent in recent contests.

"You know, we've done really well when you consider so many of the factors that are involved in politics," he said. "We've been outspent about 50-to-1 -- no, literally."

Kasich, whose initial infusion of momentum came from his second-place finish in New Hampshire back in February, has outlasted most of the field but has thus far been unable to gain enough traction to win more than his home state of Ohio--even as the race moved in April to more friendly terrain for Kasich. In Tuesday's Northeastern primaries, which were home to the more moderate brand of Republican among whom Kasich should be at home, GOP front-runner Donald Trump swept all five states voting.

Still, even before his explicit announcement on the topic Thursday night, Kasich has been taking steps indicating his intention to stay in the race until the end. He's been saying in media interviews, including on CBS' "Face the Nation" this Sunday, that he's begun vetting potential running mates and would consider using that as part of his pitch to delegates on the convention floor in Cleveland.

Earlier this week, in an unprecedented move to stop Trump from reaching the 1,237 delegates necessary to win the Republican nomination outright, Kasich and Cruz announced that they would be bowing out of specific states in an effort to help each other win those states against Trump. Under the agreement, Cruz would focus on Indiana, which votes next Tuesday, while giving Kasich a clear path in Oregon (May 17) and New Mexico (June 7).

"I want to be somebody that talks about the way things can be," Kasich told the crowd in Portland.