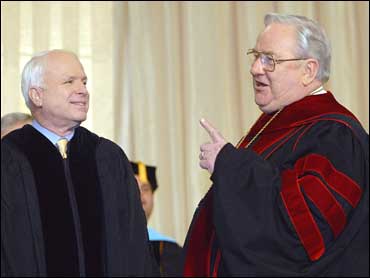 This column was written by Byron York.

On the campus of Liberty University, by the side of a road near Williams Stadium, a lone protester stood Saturday morning as Sen. John McCain appeared with Rev. Jerry Falwell at the school's commencement ceremony. As cars rolled by, the man held up a sign in each hand. One said Falwell can't save McCain, and the other said shame on McCain for pandering to Falwell. On the second sign, there was a bumper sticker in the lower left-hand corner that said, simply, Hillary.

It's a good bet the man was the only malcontent — and Hillary fan — on campus that day. McCain's much-publicized visit to Liberty University was, from all appearances, universally well-received by Falwell, by the school's graduates, and by their families, although some of them didn't have a terribly clear idea of what the controversy was about, anyway.

The big question before McCain's speech was whether he would make any reference to the 2000 campaign, in which he called Falwell an "agent of intolerance" and a figure who exercised an "evil influence" in the Republican party. Would McCain find some sort of graceful way to address the issue? Would he act like it never happened? Or would he come up with a third way, a way to deal with the problem without confronting it head on?

The ceremony started with Falwell lavishing praise on the Arizona senator. The two men had dinner together Friday night, and Falwell arranged a reception at which McCain met George Rogers, a Liberty University adviser who survived the Bataan Death March in World War II. Falwell described listening to the conversation. "As they talked to each other, I could not help, with tears in my eyes, to think what little price I have paid, most of us have paid, for the right to do what we're doing here today," Falwell told the crowd. "We owe much to this man [McCain]. The ilk of John McCain is very scarce, very small, and so today we pay tribute to a great American." Then, "in recognition of John McCain's commitment to conservative ideals," Falwell presented McCain with an honorary degree.

When McCain rose to speak, he did not return the tribute. In fact, he mentioned Falwell's name exactly once, when he said, "Thank you, Dr. Falwell." Then McCain began what seemed to be a boilerplate graduation-address introduction, talking about what a know-it-all he had been when he was young and how he became much less certain of his rightness as he grew older. But he was in fact laying the premise for everything to come. He loved to argue back then, McCain said, and arguing is still a good thing. In fact, we owe it to ourselves to argue. "We have our disagreements, we Americans," McCain told the students. "It is more than appropriate, it is necessary that even in times of crisis, especially in times of crisis, we fight among ourselves for the things we believe in."

That led McCain to the most disagreed-upon issue in American politics today, the war in Iraq. He supported the decision to go to war, he said, and he still does. But he respects those who disagree and believes Americans "should argue about this war." "If an American feels the decision was unwise, then they should state their opposition, and argue for another course," McCain said. "It is your right and your obligation. I respect you for it." And then, with a Lincolnesque touch, he added, "But I ask that you consider the possibility that I, too, am trying to meet my responsibilities, to follow my conscience, to do my duty as best as I can, as God has given me light to see that duty."

With that, McCain moved on to that third way of dealing with his clashes with Falwell, and, by extension, with millions of Christian conservatives who might not necessarily follow Falwell but who were put off by McCain's attacks in 2000. "Let us argue with each other then," he said:
By all means, let us argue. Our differences are not petty, they often involve cherished beliefs, and represent our best judgment about what is right for our country and humanity. Let us defend those beliefs. … But let us remember, we are not enemies. We are compatriots defending ourselves from a real enemy. We have nothing to fear from each other. We are arguing over the means to better secure our freedom, promote the general welfare and defend our ideals. It should remain an argument among friends; each of us struggling to hear our conscience, and heed its demands; each of us, despite our differences, united in our great cause, and respectful of the goodness in each other. I have not always heeded this injunction myself, and I regret it very much."

Those were the words McCain had traveled to Lynchburg to say. Some observers saw more importance in what McCain said about Iraq, although he has defended his position on the war many times before. Others thought his message of reconciliation was the beginning of a theme for his entire 2008 campaign, to bring the nation together, but that seems unlikely given that McCain's position on Iraq alone — he is a hawk's hawk who vows to be the last man standing in support of the war — allows for little common ground with the war's opponents. His words, rather, were a way to patch up differences with the fellow conservatives he needs to win the Republican presidential nomination. Punctuating them was the picture of McCain and Falwell on stage, smiling and reconciled.

There are reports McCain will give the same speech when he addresses graduating students at the New School in New York on Friday. But there, in that different context, the same words will have a different meaning. The New School's students, who are already angry about McCain's appearance — many of them don't like that he set foot on Falwell's campus — will likely take McCain up on his invitation to express their opposition. In contrast to the friendly and receptive crowd at Liberty University, McCain might end up preaching reconciliation to a noisy group that has no interest in reconciling. If that happens, he'll look good, and they'll look bad. And McCain will win twice with one speech.

Byron York NR's White House correspondent, is the author of The Vast Left Wing Conspiracy: The Untold Story of How Democratic Operatives, Eccentric Billionaires, Liberal Activists, and Assorted Celebrities Tried to Bring Down a President — and Why They'll Try Even Harder Next Time.

By Byron York
Reprinted with permission from National Review Online