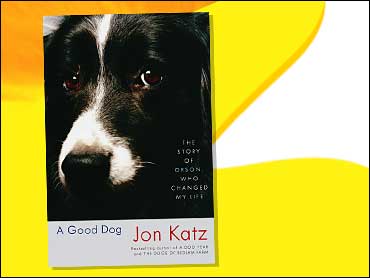 Dogs are said to be "man's best friend." That's certainly the experience of journalist Jon Katz, who celebrates his relationship with his dog in "A Good Dog: The Story of Orson Who Changed My Life." He drops by The Saturday Early Show to talk about it.

Katz concludes the canine love story he began in "A Dog Year" (2002). Border collie Devon was a misfit from the moment he arrived at the Katz household in New Jersey. He tried to herd garbage trucks, snowplows, buses, kids on skateboards. After months of attempting to discipline the high-strung pup, Katz took him to train with Carolyn, an animal behaviorist and sheepherder.. This book is about his life and adventures in trying to help Devon-Orson become a better dog and how the dog really did change his life.

To read an excerpt from the book, click here.

Since 2001, Katz has written five books about dogs, farm animals and rural life. Before becoming an author and critic in the late 1980s, he worked variously as a reporter and editor at such publications as The Boston Globe and The Washington Post. At one time, Katz was the executive producer of the "CBS Morning News." Before leaving CBS, he produced a documentary with Bill Moyers called "Big Gamble in Atlantic City."

In addition to his books about animals, Katz has written six works of fiction (the novel "Sign Off" and a mystery series) and ten works of non-fiction.. He writes about dogs and rural life for the online magazine Slate.com and he is co-host of Northeast Public Radio's monthly broadcast "Dog Talk."

Katz is married to the journalist and Columbia University professor Paula Span. Their daughter, Emma Span, lives in Brooklyn and writes about film. Katz lives on Bedlam Farm in upstate New York with his Yellow Labs, Pearl and Clementine; his border collies, Rose and Izzy; his donkeys, Lulu, Fanny, Jeannette and Jesus; his barn cat, Mother; his 2,000-pound steer, Elvis; the cow Luna; Winston the Rooster; some chickens, and 30 sheep.

Over the summer, the HBO Films adaptation of "A Dog Year" (starring Jeff Bridges as Katz) began production for theatrical release in 2007. "The movie people took over the farm and they had six border collies to play Orson," says Katz. "The six border collies stayed in the barn. They were made up every morning, with color lenses and hair extensions. And they were very cheerful; they were very much like actors… I was wondering why the dogs were so affectionate to Jeff. The trainer told me that they put hot dog in his ears and chicken broth on his chin!"

Katz is already looking ahead to July 2007, when "Dog Days" will be published. That's a new book, a continuation of "Dog Year."