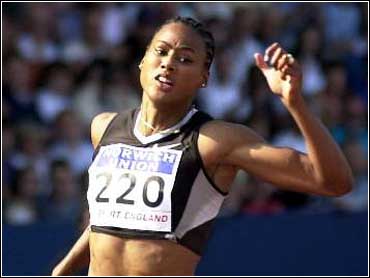 The 24-year-old American, who hopes to win an unprecedented five gold medals in the Sydney Olympics, picked up $10,000 Saturday from the organizers of the British Grand Prix for clocking 10.78 seconds, the fastest time at 100 meters this season.

"I think five is possible if I stay healthy and happy - you guys look out," Jones said. "I still have a few things to iron out ... but it feels good. It's important not to be tired when Sydney comes around. I will be fresh and ready to go."

Jones, who didn't long jump here her weakest event said she will jump twice before Sydney. Then, after a meet Aug. 11 in Zurich, Switzerland, she'll return home for a 10-day rest before running in Brussels and Berlin in her last Olympic tuneups.

Defending Olympic champion Allen Johnson continued his comeback after a year of injury, taking the 110 high hurdles in a slow 13.35. Johnson has beaten all his major rivals in the last six weeks except Britain's Colin Jackson, the defending world champion. He missed Saturday's meet with a recurring hamstring injury.

"I just wanted to be technically sound, and I feel like I did that," Johnson said. "The time wasn't as good as I'd like but I won and it's cool with me. I feel like I'm ready for the Olympics right now."

In addition to Jones, three others also got $10,000 bonuses for the best world performances of the season.

Hicham El Guerrouj of Morocco, the world's best middle-distance runner, clocked in 3 minutes, 45.96 seconds in the mile the eighth-fastest ever. It was the fifth-fastest mile of his life, but well off his world record of 3:43.13.

"I'm satisfied today with my race because the pacemaker did a good job," said the Moroccan, who also holds the world outdoor marks in the 1,500 and 2,000. "For me today it was my duty to prove I'm one of the world's best at this distance."

In the women's 5,000, Ayelech Worku of Ethiopia picked up the bonus by running the top time in the world this season. The previous best was by American Regina Jacobs.

In a high-jump best of the season, Vyacheslav Voronin of Russia cleared 7 feet, 10 1/2 inches.

Canada's Bruny Surin won the 100 meters in 10.16. But the fastest time of the day in that event went to 17-year-old Briton Mark Lewis-Francis, who clocked a personal best of 10.10 in the so-called "B" race.

"It was a real shock when I saw the time," Lewis-Francis said. "I was expecting to run around 10.20. I haven't even started doing my real speed work yet."

American Sandra Glover won the 400-meter hurdles, taking the lead early and clocking 53.92, well off her world-best this season of 53.33. Olympic champion Deon Hemmings of Jamaica was third in 54.69.

"It's good to get one over on the Olympic champion, but I'm not going to let my guard down," Glover said. "She will be out there as my main danger the rest of the season."

In the men's 400, Greg Haughton of Jamaica won in 44.91, nipping Mexico's world bronze medalist Alejandro Cardenas in 44.92. Briton Mark Richardson, running his first race since British officials lifted his doping ban last month, was third in an Olympic-qualifying 45.11, his first race since September.

The women's long jump went to Ukraine's Inessa Kravets with a leap of 22-8 1/2. Iva Prandzheva of Bulgaria and Dawn Burrell of the United States were at 22-5 3/4.

American Nick Hysong won the pole vault in at 19-0 1/2, with second-place Tim Lobinger of Germany clearing the same height.

In the major meet disappointment, Australia's Cathy Freeman the two-time defending world champion and 1996 Olympic silver medalist, withdrew from the 400 with what she called a "slight hamstring problem."