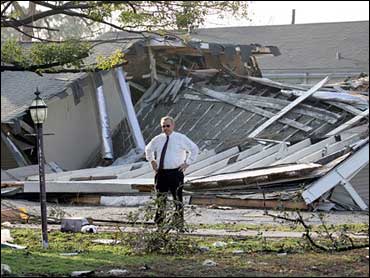 After four and a half years of litigation and name-calling, the case of Paul Corbin Jones versus William Jefferson Clinton ended in the polite exchange of a four-page fax.CBS News Correspondent Phil Jones reports.

Clinton attorney Robert Bennett was, at first, skeptical of terms of the settlement proposal: $850,000, no apology, no strings, and Mrs. Jones walks away from her sexual harraassment lawsuit. Twice before she walked away from a settlement deal as pen hovered above paper.

"I want it in writing," Bennett told her lawyer Thursday.

In New York, a relieved Mrs. Jones, just finished with a paid taping of TV's tabloid Inside Edition, burst into tears at first word of Friday's settlment.

As part of Bennett's condition for written confirmation, McMillan signed a letter Friday morning promising that Mrs. Jones would dissociate herself from the $1 million offer from real estate tycoon Abe Hirschfeld earlier this year.

Susan McMillen, who has been at Jones' side as her friend and advisor, was asked if Jones considers a settlement a victory. The answer was, "You bet."

Jones has legal bills of nearly $2.5 million, but lawyers have agreed to settle for less. With the Jones case gone, an army of White House lawyers could now focus exclusively on this week's House impeachment proceedings. "The president doesn't want to spend one more minute" on the Jones case, Bennett said.

"Paula is very pleased that it's finally over," said her lawyer.


Jones' and her lawyers planned a Monday news conference in Los Angeles.

Jones alleged that Mr. Clinton, as Arkansas governor, made a crude advance in a room at a Little Rock hotel. Mr. Clinton has denied her accusation, and her lawsuit was dismissed April 1. An appeal of that dismissal was pending.

Jones had initially demanded $1 million and an apology from the president. President Clinton's lawyers made it clear no apology would be forthcoming.

Jones, who was a clerk for the Arkansas state government when the alleged encounter occurred in 1991, contended in her lawsuit that her rejection of Mr. Clinton's advance later affected her job opportunities.

U.S. District Judge Susan Webber Wright ruled on April 1, that Jones' allegations, even if true, did not add up to a "hostile environment" case of sexul harassment.

Jones' lawyers had appealed that ruling to the 8th U.S. Circuit Court of Appeals.

It was Mr. Clinton's sworn deposition for the Jones case that led to the impeachment hearings that begin next week in the House Judiciary Committee.

©1998 CBS Worldwide Corp. All rights reserved. This material may not be published, broadcast, rewritten, or redistributed. AP contributed to this report