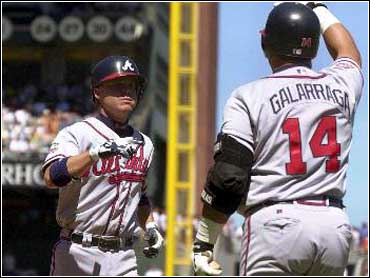 Tom Glavine knew that once the Braves got the lead back from the San Francisco Giants, it was going to be up to him to make sure Atlanta didn't get swept.

"I kicked it into another gear and got more aggressive," Glavine said. "It was like, I've got the lead, I'm not going to give it back."

Chipper Jones had two home runs for the Braves.

Glavine joins Arizona's Randy Johnson with 16 wins this season. Johnson threw a four-hitter as the Diamondbacks beat the Chicago Cubs 5-4 on Sunday.

Glavine, 5-1 in his last six starts, sent the Giants to just their 19th loss in 60 games at Pacific Bell Park. Glavine is 3-0 against the Giants this year. He allowed four runs three earned and three hits in seven innings.

"We only had four hits today," Giants second baseman Jeff Kent said, "and that's not enough to beat the Braves."

Ellis Burks homered twice for the second straight game for the Giants.

With the Giants leading 4-3, Jones led off the fifth inning with his 27th home run to tie the game. Jones went 4-for-4.

Andres Galarraga reached on shortstop Rich Aurilia's throwing error, then scored on Brian Jordan's double off Kirk Rueter (8-8) to put the Braves ahead. Walt Weiss added an RBI single later in the inning.

Jones also led off the third with a solo shot. It was the fifth time this year he has homered twice in one game, the 17th time in his career.

"We'd held Chipper in check pretty well until today," Giants manager Dusty Baker said. "We were hoping they'd get out of town before he found his stroke."

Burks gave San Francisco the lead in the third with a three-run homer off Glavine (16-6) over the right-field wall short of McCovey Cove and San Francisco Bay. He also hit a solo shot with one out in the ninth off John Rocker.

Rueter got in trouble early. With one out in the first, Andruw Jones singled, went to third on Chipper Jones' single, and scored with Galarraga's single.

In the bottom of the inning, the Giants narrowed it to 2-1 on Kent's RBI single. He scored Aurilia, who reached on a throwing error by Weiss at shortstop.

Rafael Furcal added an RBI double in the seventh inning, and Javy Lopez hit an RBI single in the eighth.

Reggie Sanders was 4-for-4, with singles in the second, fourth, fifth and seventh inning, matching a career high.