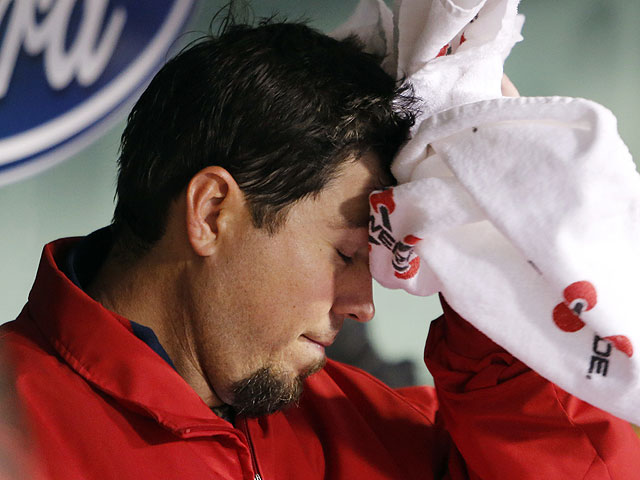 (AP) BOSTON - Josh Beckett must have lasted longer on the golf course than he did on the mound.

The embattled Red Sox ace was booed off the field at Fenway Park when he was pulled after just 2 1-3 ineffective innings Thursday night against Cleveland.

Hours earlier, Boston manager Bobby Valentine downplayed the uproar over Beckett's golf outing last week, which came a day after he was scratched from his scheduled start because of stiffness.

Already in hot water with Red Sox fans when the story surfaced that Beckett was hitting the links with his sore lat, Beckett was jeered early and often Thursday as the Indians tagged him for seven runs and seven hits, including two homers, while building a 7-1 lead.

One fan yelled "FORE!" when Michael Brantley lined a foul ball down the right-field line, but all the chuckles quickly subsided when Brantley doubled to left-center. It was the second straight double for the Indians, ending Beckett's night.

Fans cheered when Valentine came out of the dugout and immediately signaled to the bullpen for lefty Andrew Miller.

Beckett's off-the-field decisions and commitment to the team have come into question before.

After last season, it was revealed that he was among a group of pitchers who ate fried chicken and drank beer in the clubhouse during games on days they didn't pitch.

It is common for players to golf during the season, but typically not when recovering from an injury.

Valentine said before the game that Beckett was scratched from a start last week with stiffness, which he didn't think would be made worse by golfing. Had Beckett been sidelined with an injury, Valentine might have felt differently.

"I didn't think he was injured when he was skipped," Valentine said.

Fans haven't been so forgiving since the story surfaced earlier this week. The Red Sox were off to a 12-18 start and were last in the AL East going into Thursday night's game.

Valentine, speaking before the Red Sox opened a homestand against the Indians, said he understands why fans were outraged that Beckett was golfing instead of resting for his return to the rotation.

A sour mood in Boston still lingers over the team's record collapse at the end of last season, when the Red Sox slumped through September and were knocked out of playoff contention in the final game.

"I was told there was a lot of negative feelings about last year. The first month of play, we haven't done anything to erase those feelings," Valentine said. "We have to play better and I think it will get better."

As for Beckett, a few good outings would probably restore a positive outlook among the fans who are angered by his golf outing. A few bad starts, however, and the pressure on him is only going to increase.