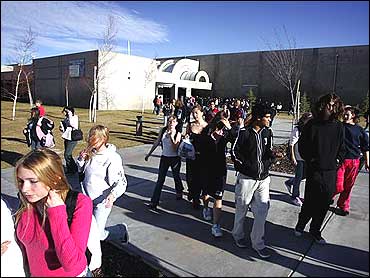 Houses of scholarship and worship have peacefully shared space for years in the mountains dividing the conservative San Joaquin Valley from the left-leaning Los Angeles basin.

But when a religion-based alternative to evolution was introduced into a high school class in Lebec taught by a preacher's wife, the discussion moved from classroom to courtroom.

At issue is whether the class, "Philosophy of Design," crosses the constitutional line separating church and state by lending credibility to "intelligent design," a theory that life is so complex it must have been created by a higher being.

A federal judge in Fresno was scheduled to hold a hearing Tuesday on whether to halt the Frazier Mountain High School class midway through the month-long winter term.

Americans United for the Separation of Church and State, which successfully blocked Dover, Pa., schools from introducing the controversial topic into science classes last month, sued El Tejon Unified School District last week on behalf of 11 parents, saying their course was "designed to advance religious theories on the origins of life."

The debate it generated has given the dozen or so unincorporated communities that send their kids to the high school a crash course on the legal issues in question — and everyone has taken sides.

"You have cultural tectonic plates bumping up against each other here," said Patric Hedlund, editor of the weekly Mountain Enterprise.

Families move to these towns tucked into the Los Padres National Forest to escape the urban sprawl of Los Angeles or the rural farmland valley to the north.

"This is the meeting point — where they're learning to be neighbors," Hedlund said.

Sharon Lemburg, a social studies teacher and soccer coach who is teaching "Philosophy of Design," defended the course in a letter to the Mountain Enterprise.

"I believe this is the class that the Lord wanted me to teach," she wrote.

Similar battles are being fought in Georgia and Kansas. Critics of "intelligent design" say it is biblical creationism in disguise, but defenders argue it is based on science and doesn't require adherence to any religious belief.

Spirited dialogue is a fine thing, but for a small, cash-strapped school district the real problem might be paying its way through a potentially expensive court battle, said Paula Harvey, head of the El Tejon Teachers' Association and mother of two high school students.

"We can ill afford to spend all this money defending what the superintendent is calling 'just a philosophy class,"' Harvey said.

Kids strolling out of Frazier Mountain High seemed generally unfazed by the media crews and the intense focus on their 500-student school.

"If you don't want your kids in the class it's one thing, but you can't keep someone else from seeing another opinion," said junior Nick Lonero.

At the Dream Castle Cafe, where everyone is well-versed on the topic and neighbors hash out differences over cups of coffee, the issue will be closely watched.

"There's ultimately going to be one side that loses," cafe co-owner Steve Stark said over the buzz of patrons. "But talking like this, we'll all gain in the process."