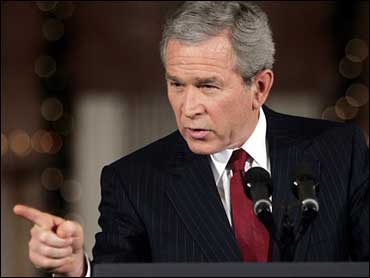 A federal judge has resigned from a special court set up to oversee government surveillance, apparently in protest of President Bush's secret authorization of a domestic spying program on people with suspected terrorist ties.

U.S. District Judge James Robertson would not comment Wednesday on his resignation, but The Washington Post reported that it stemmed from deep concern that the surveillance program Mr. Bush authorized was legally questionable and may have tainted the work of the court.

An aide to Robertson said the resignation letter submitted to Chief Justice John Roberts was not being released. Robertson did not step down from his district judgeship in Washington.

McClellan said since the judge had not directly commented, the White House would have nothing to say, CBS News correspondent Peter Maer reports.

Robertson was one of 11 members of the secret Foreign Intelligence Surveillance Court, which oversees government applications for secret surveillance or searches of foreigners and U.S. citizens suspected of terrorism or espionage. Robertson's term was to end in May.

"This was definitely a statement of protest," said Scott Silliman, a former Air Force attorney and Duke University law professor. "It is unusual because it signifies that at least one member of the court believes that the president has exceeded his legal authority."

Ruth Wedgwood, a Johns Hopkins University professor and defender of many Bush administration policies in the terror war, said that service on the special court is voluntary.

"If Judge Robertson had strong feelings that he thought would interfere with the needed objectivity, one could understand his decision," she said.

The court was established by Congress in 1978 and its members, appointed by the chief justice, do their work in private.

Quoting colleagues of Robertson, the Post said the judge had indicated he was concerned that information gained from the warrantless surveillance under Mr. Bush's program subsequently could have been used to obtain warrants under the FISA program.

Robertson was appointed a federal judge by President Clinton in 1994. Chief Justice William Rehnquist later appointed Robertson to the FISA court as well.

Robertson has been critical of the Bush administration's treatment of detainees at the U.S. naval prison at Guantanamo Bay, Cuba, most memorably in a decision that sidetracked the president's system of military tribunals to put some detainees on trial.

Some Republicans have joined a chorus of Democrats who say Congress must investigate whether the president was within the law to allow the super-secret National Security Agency to eavesdrop, reports CBS News correspondent Thalia Assuras.

"I believe the Congress, as a coequal branch of government, must immediately and expeditiously review the use of this practice," said Sen. Olympia Snowe, R-Maine.

Snowe joined three other members of the Senate Intelligence Committee, including Nebraska Republican Chuck Hagel, in calling for a joint inquiry by the judiciary and intelligence committees.

Cheney said executive authority has been eroding since the Watergate and Vietnam eras.

"I believe in a strong, robust executive authority and I think that the world we live in demands it," Cheney said.

"I would argue that the actions that we've taken there are totally appropriate and consistent with the constitutional authority of the president. ... You know, it's not an accident that we haven't been hit in four years," the vice president said, speaking with reporters Tuesday on Air Force Two en route from Pakistan to Oman.

However constitutional attorney Jonathan Turley says he believes the surveillance program is illegal.

"It is a crime to engage in surveillance, to order such surveillance without having a court order from a judge, either under the traditional process of title iii or the so-called secret court," Turley said on CBS' The Early Show.

"I do believe it's a federal crime and would constitute an impeachable offense," Turley said. "The question is whether there's a political will to look into as a high crime and misdemeanor."

The president and his top advisers have suggested senior congressional leaders vetted the program in more than a dozen highly classified briefings. Several Democrats said they were told of the program, but did not know the full details and had concerns.