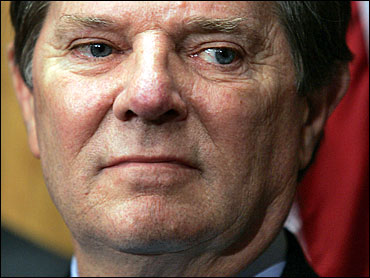 A judge dismissed a conspiracy charge Monday against Rep. Tom DeLay but refused to throw out the far more serious allegations of money-laundering, dashing the congressman's hopes for now of reclaiming his post as House majority leader.

Texas Judge Pat Priest, who is presiding over the case against the Republican, issued the ruling after a hearing late last month in which DeLay's attorney argued that the indictment was fatally flawed.

When he was indicted in September, DeLay was required under House rules to relinquish the leadership post he had held since 2003. While Monday's ruling was a partial victory for DeLay, he cannot reclaim his post because he remains under indictment.

The ruling means the case will move toward a trial next year, though other defense objections to the indictments remain to be heard by the judge.

"Mr. DeLay is very encouraged by the swift progress of the legal proceedings and looks forward to his eventual and absolute exoneration based on the facts and the law."

After the judge's decision, DeLay declined to speak with reporters as he entered a Houston hotel for a campaign fundraiser.

In a written statement, Earle's office said prosecutors were studying the ruling and had made no decision about whether to appeal. Prosecutors have 15 days to challenge the decision.

While Delay's office claimed it was a victory, the decision has created tremendous political problems for the Congressman, said CBS News correspondent Gloria Borger. DeLay is going to trial, and Borger reports many of the rank and file Republicans she talks to are becoming restless, some saying they think he should never return to his post because

his ethics charges could tarnish them (video).

DeLay, 58, and two GOP fundraisers, John Colyandro and Jim Ellis, are accused of illegally funneling $190,000 in corporate donations to 2002 Republican candidates for the Texas Legislature. Under Texas law, corporate money cannot be directly used for political campaigns, but it can be used for administrative purposes.

CBS News legal analyst Andrew Cohen reports the decision is good news for DeLay because it narrows the scope of the case against him and other defendants. By kicking out the conspiracy charge but keeping in place the money laundering charge, it makes it tougher, but not impossible, for prosecutors to gain a conviction because it requires them to focus more in specific DeLay acts, Cohen said.

In asking that the case be thrown out, DeLay lawyer Dick DeGuerin argued that one of the charges — conspiracy to violate the Texas election code — did not even take effect until September 2003, a year after the alleged offenses occurred.

Prosecutors, however, said the crime of conspiracy was already on the books, and could be applied to the election code even though such uses were not explicitly in state law at the time.

The judge was unpersuaded by that argument, and dismissed the conspiracy charge. But the judge upheld charges of money laundering and conspiracy to commit money laundering. Those charges involve an alleged attempt by DeLay to conceal the source of the campaign contributions by funneling the money through his own political action committee and then an arm of the Republican National Committee.

In trying to have those charges thrown out, the defense argued that the Texas money laundering law does not apply to funds in the form of a check, just coins or paper money. But the judge said that checks "are clearly funds and can be the subject of money laundering."

The defense attorneys also argued that the definition of money laundering in Texas involves the transfer of criminal proceeds. Because the money in this case was not illegal to begin with, they argued, money laundering never occurred.

But the judge rejected that argument, saying the money became suspect when "it began to be held with the prohibited intent."

He said if prosecutors can prove that DeLay and his associates obtained the corporate donations "with the express intent of converting those funds to the use of individual candidates," or that they converted money legally collected by sending it to the Republican National Committee and asking for the same amount to be sent back to Texas candidates, "then they will have established that money was laundered."

"The money would have become 'dirty money' at the point that it began to be held with the prohibited intent," Priest wrote.

The alleged campaign-finance scheme had far-reaching political effects: With DeLay's fundraising muscle, the GOP took control of the Texas House for the first time in 130 years, then pushed through a congressional redistricting plan engineered by DeLay that resulted in more Texas Republicans going to Congress.

At the court hearing last month, DeLay's lawyers asked for a quick decision on their request for a dismissal, and, if the ruling went against DeLay, a prompt trial, in hopes that he could regain his leadership post by the time the House reconvenes in late January. But the judge said at the time that it was unlikely the case would go to trial before the first of the year.

The judge has yet to rule on a defense bid to move DeLay's trial out of liberal, Democratic-leaning Austin and allegations of prosecutorial misconduct. DeGuerin accused the district attorney of shopping the DeLay case around to different grand juries until he found one that would indict the congressman.

The case ended up before Priest, a Democrat, after DeLay's attorneys had a previous judge removed for contributing to Democratic candidates and causes. Priest has made few political contributions over the years.

The judge acted as a CNN-USA Today/Gallup poll showed that DeLay's political standing has weakened considerably in his home district around Houston.

The survey found that 49 percent of registered voters questioned said they are more likely to vote for a Democratic challenger than for DeLay in 2006, and 36 percent said they would be more likey to vote for DeLay.

Former Democratic Rep. Nick Lampson is planning to challenge DeLay in the 2006 elections.

The survey also found that 55 percent of registered voters said that the charges that DeLay broke campaign finance laws are definitely or probably true, while 34 percent said they were probably or definitely not true.