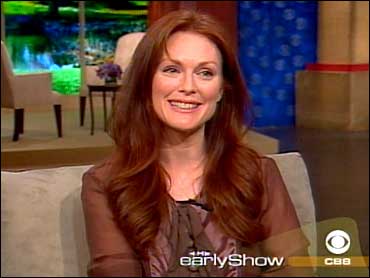 Julianne Moore is considered one of today's the most versatile actresses because of her ability to segue easily from dramas to thrillers to romance. With her new film, "Trust the Man," she also moves easily into comedy.

The movie, which costars David Duchovny, Maggie Gyllenhaal and Billy Crudup, is about two couples who are in mid-relationship and have been friends for years. Duchovny plays Moore's husband and Crudup portrays her brother.

The main problem between Moore and Duchovny is sex: He wants more of it.

"I think it's about people and relationships wanting different things at different times," Moore told The Early Show co-host Harry Smith on Friday. "… He wants — I don't know if it's just sex he wants or if it's attention. "

Moore said that later in the movie, her character says she doesn't want to sleep with her husband because he is too needy. "What's interesting about the characters is they're pretty honest with their friends, anyway, about their mates," she said.

Moore's husband, Bart Freundlich, wrote and directed the film. Moore said he initially offered her part to another actress.

In some ways, Moore said, the movie is an example of life imitating art. In the film, much to the chagrin of her character's husband, she wears a retainer. Moore said it is her retainer in real life. More than that, just like in the movie, she grapples with the trials and tribulations of marriage and values her friends and community.

Moore will be performing on Broadway this fall in a play called "The Vertical Hour," and she just finished shooting an independent movie. But for now, she is more concerned with her two children.

"I'm kind of concentrating on getting my kids to school and doing all that," she said. "So then I'll start rehearsal and we'll see how it all is."