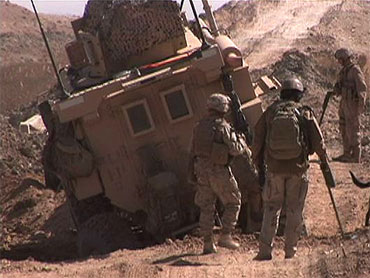 This story was filed by CBS News correspondent Mandy Clark, who was embedded with the 3/6 Jump Platoon during the recent operation to rid the town of Marjah, in Afghanistan's Helmand province, of Taliban fighters.

Jump Platoon has one mission: Protect the Battalion Commander as he moves in his battle space. Where he goes, they go.

For Jump Platoon 3rd Battalion, 6th Marines, "he" is Lt Col Brian Christmas. The Colonel hand-picked many members of the team. "I trust them completely," Christmas says. "They do a great job and work hard."

Each member of the platoon brings a different set of skills.

"It's always interesting about Jump platoons. They always get the orphans from each company so you get a rag-tag band, but when they come together, they are quite an impressive group," says Chief Warren Officer, Marine Gunner, Joshua Smith. Smith is the platoon's weapons expert, and his skills have paid off.

On a recent patrol, he spotted a wire coming from a house that led to explosives.

"It was so obvious that it looked like a set-up." It was. On his advice, the Marines did not enter the house. Instead, they set off a small charge just inside the door.

Photos: Embedded with the Marines

The charge triggered the bombs inside the rigged house, leaving only a pile of rubble where it once stood. Gunner Smith estimated that about 40 pounds of explosives were likely hidden in the home. "We would have lost Marines that day, I'm just glad I caught it."

Lt Col Christmas has a slightly different style to most Battalion Commanders -- he likes to be on the front line most of the time. That means his Jump platoon sees more action than others.

"I love jumping to the fight, it's what we do," says platoon leader Sgt Dennis Derr.

"We've taken fire from machine guns, RPGs (rocket propelled grenades), we've been mortared on the move, we've hit a number of IEDs," recounts Derr. "We pretty much have encountered every possible scenario."

Cpl Joshua Bower is the Platoon Sergeant. Serving his third tour of duty at just 21, he's seen a lot of action. In Iraq, a sniper's bullet hit him in the back of the neck, just missing his spine.

Bower says the injury has made him more keenly aware of the dangers he and other U.S. troops face on the frontline. "I signed up to do this job and I love it, but don't get me wrong, I don't want to die."

Constantly moving around the battle space means the platoon needs to cover more terrain, and that means there's a greater danger of roadside bombs.

Cpl Paul Mauser is commander of Jump platoon's lead vehicle of. Nicknamed "Mighty Mouse," his MRAP has been hit twice in a short space of time.

"I'm 0-2, I would like to get the guy who is trying to kill me," he says, admitting that riding in the lead vehicle can take a toll on his nerves. "I'm proud to do what I can to protect the Colonel."

But Lt Col Christmas sees the platoon as more than just his own personal body guards.

"They are a great group of guys, and even though some of them are close to my age, I do feel like they are like my sons."