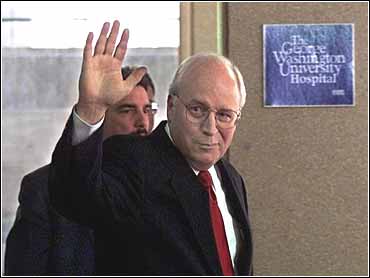 Vice President Dick Cheney explains his lack of presidential ambition in three words: "age and health." But he is quick to add he feels fit to serve as president.

"I wouldn't be here if I didn't," Cheney said Monday during an Associated Press interview in his West Wing office.

As a presidential candidate, George W. Bush tapped Cheney to head his running-mate search last year and ended up picking Cheney for No. 2.

Cheney had said he did not aspire to the top job, and his view has not changed with a taste of the White House, he said Monday.

"I really made it a very conscious decision several years ago before the '96 campaign when I looked at running myself and decided not to," he said. "Part of that was to take a good hard look at whether I wanted to run myself. And I decided not to."

Cheney has had four heart attacks, and in March, went to the hospital after experiencing chest pain. Doctors said his discomfort was related to a procedure he underwent in November, when he had a mild heart attack.

He cited that history in the interview.

"By the time President Bush finishes his tour I'd be 68, and given my health history, I think it's unlikely that I would ever be a candidate myself," he said. "I made that decision a long time ago that I wasn't going to run (because of) a combination of age and health."

Cheney joked in the interview that he has not had any chest pain "in the last week or two."

"I feel fine," Cheney said. "I was on my exercise equipment this morning. I've got medical folks that follow me around; that goes with the job."