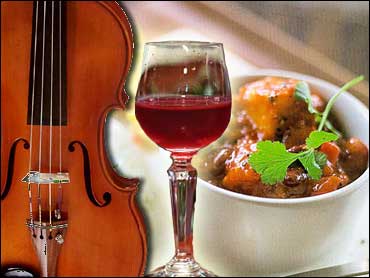 You probably didn't know it, but this past Monday, Sept. 22, was a national holiday. It was, "Family Day — A Day To Eat Dinner With Your Children." I don't remember getting a day off from school for that one, so it must be fairly new. There are many holidays that aren't famous enough to close the schools, make the headlines, or stop the mail. If you wanted to, you could celebrate one every day. Some people somewhere actually observe "Cousin's Day," "National Get Out of the Doghouse Day," and "Take Plants For A Walk Day." Last week was "National Small Business Week." I guess it was an appropriate time to celebrate small businesses. There are more and more small businesses these days — of course, because of the economy, they used to be big businesses.

But celebrating eating dinner as a family should not be dismissed with the likes of "Make Up Your Mind Day" or "'Hot Enough For Ya?' Day" (which is July 23rd, by the way). Researchers have found that teenagers who eat with their families are far less likely to get into trouble at school, smoke, drink, suffer from depression, or use illegal drugs. And the National Center on Addiction and Substance Abuse at Columbia University has determined that the more often kids eat dinner with their parents, the better off the kids are.

On the other hand, I've been unable to find any statistics that tell if eating dinner frequently with their children drives parents crazy and actually increases the likelihood of parents becoming depressed and turning to alcohol or drugs.

But learning that families who eat together produce healthier kids made me feel I'd be irresponsible if I didn't celebrate "Eat Dinner With Your Children Day" appropriately. So Monday, I announced to my son that because of the holiday, it would be important for all of us to eat together that night. He gave me a look that some people would interpret as, "What are you, crazy?" I chose to interpret it slightly differently as, "I don't understand, Father. How could our eating together possibly make me a safer, healthier person?"

I answered by saying that it didn't seem far-fetched to me at all. Doesn't it make sense that the more time children spend with their parents, the more aware parents will be about what's going on in their kids' lives? Wouldn't a family dinner provide a great opportunity for children to tell their parents things that are bothering them before they get worse? Won't kids feel better about themselves, knowing that their parents enjoy their company at dinnertime? My son's "what are you, crazy?" look persisted, but so did I.

So, we actually sat there together at dinnertime. I admit we didn't talk all that much, and no great problems were solved. But I didn't see my son take a drink or light up a cigarette.

I was pleased by the experience, and consider it a success. Maybe my son isn't as opposed to spending time with his parents as he pretends to be. Maybe on some level, he realizes it can be a beneficial experience. After all, if he thought it was a waste of time, he could have gotten up and left the room. But he stayed. He didn't even fidget or seem uncomfortable. He couldn't have been more focused. And I think it was just a coincidence that you can see the TV from our dinner table, and that "Monday Night Football" was on.