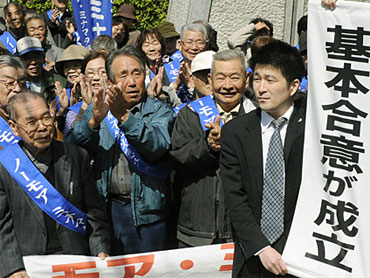 More than 2,000 people who suffer from a rare neurological disorder agreed to accept a settlement proposal Monday and abandon their lawsuits against the Japanese government and the company they say made them sick by dumping mercury.

The plan, brokered by the district court in southern Kumamoto - home to tens of thousands who have Minamata disease - calls for lump-sum payments of 2.1 million yen ($22,600) each and monthly medical allowances of up to 17,700 yen ($190), Environment Ministry official Shigeki Shiiba said.

The disease was first diagnosed in 1956 and later was linked to the consumption of fish from southern Kyushu island's Minamata Bay, where chemical company Chisso Corp. dumped tons of mercury compounds.

The government has only recognized 3,000 Minamata patients - and offered them free medical care - while thousands of others have unsuccessfully applied to be recognized as suffering from the disorder.

Mercury Poisoning On The Rise

More than 2,000 of those who have not been recognized filed suit in Kumamoto against central and local governments and Chisso, and the settlement plan is primarily for them. But the government plans to expand the scheme to also cover more than 30,000 of their peers, including those who did not go to court, Shiiba said.

All applicants for the scheme, including the plaintiffs, are still subject to eligibility screening, he added.

The agreement follows a passage of a controversial law in July promising unspecified aid to the unrecognized patients only if they withdrew the lawsuits.

Under Monday's agreement, Chisso pays the lump-sum payment to each patient, as well as a 2.95 billion yen ($32 million) for the plaintiffs' group to cover legal fees and other unspecified costs.

"We'll keep fighting until all Minamata victims are rescued," he added.

The disease causes spasms, blurred vision, sensory loss and other symptoms. The babies of poisoned mothers are sometimes born with gnarled limbs.

A 2004 Supreme Court ruling held the government responsible for allowing the pollution to continue for years after its discovery - the company did not stop the practice of dumping until 1970. That ruling prompted renewed calls the government to expand the scope of support.

"I apologize for the victims who had to go through the pain," Environment Minister Sakihito Ozawa said.

Minamata disease became an international symbol of environmental damage and corruption behind Japan's rise to economic prominence. Victims who spoke out say they were stigmatized, harassed by company thugs and endured lengthy and costly legal battles.