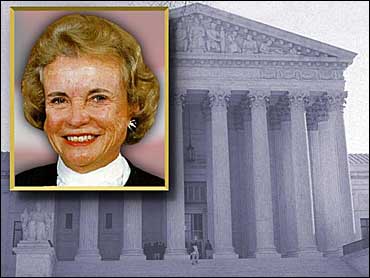 Justice Sandra Day O'Connor dismissed growing criticism about the Supreme Court's use of international law in its opinions, saying it makes sense for justices to look at foreign sources when a point of law is unclear.

O'Connor, a Reagan appointee, participated in a lively one-hour discussion at the National Archives with Justices Antonin Scalia and Stephen G. Breyer on Thursday. She said if there is no controlling U.S. precedent or the viewpoint of states is unsettled, "of course we look at foreign law."

"This is much ado about nothing," she said in response to a question by moderator Tim Russert of NBC. "Our Constitution is one that evolves. What's the best way to know? State legislatures — but it doesn't hurt to know what other countries are doing."

O'Connor's comments come amid a growing divide on the court over the citation of international opinion to support decisions interpreting the Constitution.

And House Majority Leader Tom DeLay said Tuesday that Supreme Court Justice Anthony Kennedy's work from the bench has been "incredibly outrageous," his latest salvo at the federal judiciary in the weeks following the courts' refusal to stop Terri Schiavo's death.

"I think Tom DeLay's point is that he's calling Justice Kennedy one of those so-called activist judges who doesn't rely solely on the Constitution when he writes his opinions," said CBS News Correspondent Gloria Borger.

Last month, justices ruled 5-4 to outlaw the death penalty for juvenile killers, citing in part international sentiment against it.

O'Connor, who dissented in that ruling, wrote in a separate opinion that international law was relevant but in that case wasn't strong enough to justify striking down the practice since many state legislatures still allowed it.

Earlier this week, House Majority Leader Tom DeLay singled out Justice Anthony Kennedy's work as "incredibly outrageous" and "activist," citing his majority opinion in the death penalty case in particular because the Reagan appointee uses international law and "does his own research on the Internet."

Three of the justices — Scalia, Chief Justice William H. Rehnquist and Clarence Thomas — have said foreign law has no relevance. Scalia has been increasingly critical of the practice in recent months, pointing to decisions in recent years to decriminalize gay sex and ban the execution of the mentally retarded.

"I don't agree it's much ado about nothing," Scalia said in response to O'Connor. Regarding the death penalty case, he said the majority led by Kennedy "contradicted the view of the majority of the states."

"I don't see how international law is relevant. I don't know what a South Africa court will tell you about American law," he said.

Breyer countered: "It's appropriate in some instances to look at other places. It's not binding by any means. But if they have a way of working out a problem that's relevant to us, it's worth reading."

During the panel discussion, the three justices also said their typical work day consists mostly of reading — "on average 1,500 pages a day," according to O'Connor — and some writing.

In response to questions, the justices said they never horse-trade for votes, although at times they might seek a unanimous vote if possible in a particularly controversial case.

O'Connor, Scalia and Breyer also said they opposed live television coverage of their oral arguments, which are open to the public and available on audiotape several days afterward. They said sound bites could misrepresent the proceedings.

"For every one person who watches gavel to gavel to understand what's going on, 10,000 will see takeouts on network news I guarantee will be misinterpreted," Scalia said.

Breyer said the court prefers to avoid making a dramatic change that might prove to have unintended consequences, such as a distortion of the court's work.

"First go with the audio, and be very cautious. I think that would be my point of view," he said.